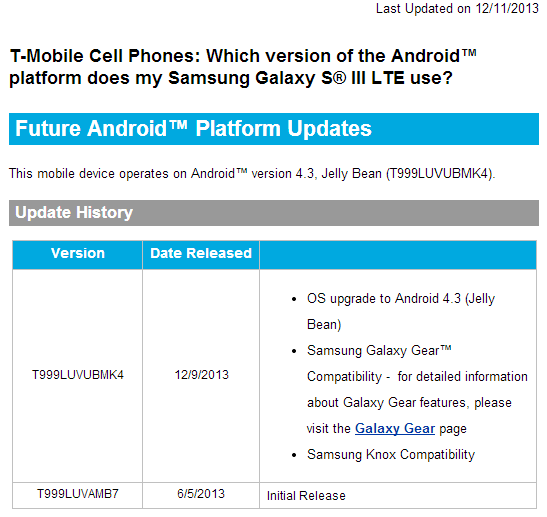 This is the Android 4.3 update that Samsung has been sending to the various models of the Galaxy S III, S4, and Note II across all American carriers, including the non-LTE version of T-Mobile's S III. Notably it includes support for the Galaxy Gear smartwatch, which was previously missing among all Samsung phones released before the Galaxy Note 3, along with the rest of the features included in Android 4.3. There are also new features for TouchWiz and general tweaks for performance, stability, and Samsung KNOX compatibility, plus some visual changes that bring the S III closer to its newer stablemates.

This thread on XDA shows that the update has been going out since at least Monday, so a considerable portion of the T-Mobile SGH-T999L userbase should have received it by now. You can also try your hand with Samsung's Kies desktop software. As usual, those who prefer rooted versions of the stock ROM will probably want to wait until the community confirms a root method or comes up with a new one. Neither Samsung nor T-Mobile are listing the size of the update, but XDA users are saying it's over 500MB, so you may want to find a handy WiFi hotspot.