Basically, the Smarty Ring is a bit of curved circuit board, an LED screen (or two), a tiny battery, a diminutive speaker, and a Bluetooth 4.0 radio sitting inside a deceptively nondescript stainless steel ring. The full version of the device includes an always-on clock face, a series of permanent notification icons, and music controls molded into the circular housing. As far as capability goes, the ring functions as a clock (with multiple time zones, a stopwatch, and a timer), accepts or reject calls (though not on the ring itself), trigger your phone's camera, control music playback, play an alarm when your phone leaves Bluetooth radius, and of course, get notifications from all the standard communications and social apps. 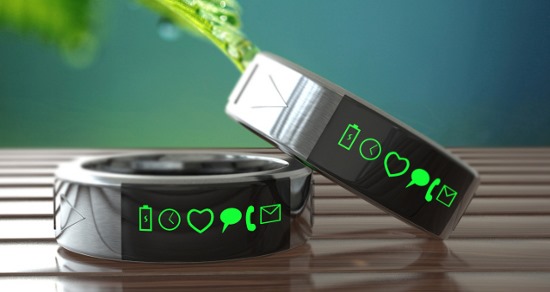 I've got to say it's an intriguing little design. The ring itself is completely delayed and waterproof, and it charges wirelessly on a custom-build pad. The creators are already committed to both iOS and Android apps which will manage the Smarty Ring's functions in pretty much the same way that current smartwatch apps do. It will be made to order in full ring sizes from 5 (15.7mm diameter) all the way up to 15 (23.83mm diameter), which should cover just about any potential customer. Best of all, the ring actually looks good - it's not exactly high fashion, but it's not going for the Dick Tracy meets Star Trek look either.

The Smarty Ring has already reached its $40,000 Indiegogo funding goal, and at the time of writing it's sitting at just over $120,000. A basic "Tracker" model without any alert or control functions will cost a $50 pledge, a Clock version with the added time and alarm functions costs $70, the Remote version with the Clock and music controls costs $100, and the full-function model will cost you $175. Estimated delivery is April of next year.

But hold your horses. The creators haven't actually shown any working models. True, they've got a PCB design and a pretty good idea of how everything is supposed to work, but all the photos on the Indiegogo page and everything in the video is rendered or mocked-up. That doesn't inspire confidence in the product, let alone the timetable - even smartwatches with near-finished hardware designs take a lot longer than four months to go into full production. The campaign also uses Indiegogo's flexible funding option, which pays the creators whether or not they reach their goal. Lastly, there's no information about the people or company behind the project anywhere - not on Indiegogo and not on the company web page, which incidentally has a domain registered with a third party proxy.

None of these observations prove that the Smarty Ring isn't real, but they don't bode well, either. The project is funded, so it will go forward whether you get a in a pledge in the next 29 hours or not. I've backed plenty of crowdfunded projects before, but I'm inclined to let the current 644 backers take the risk on this one. I hope it comes to fruition.