You don't have to spend much time on the Play Store to see that games are a big part of the service and the platform. Google has already done a lot to highlight gaming with Play Store categories and landing page promotions, but starting in February, developers and end users will have roughly three times as many categories to browse through. The new game categories are as follows:

That's seventeen categories, up from the previous six (Arcade & Action, Brain & Puzzle, Cards & Casino, Casual, Racing, and Sports Games). Developers who have current games on the market will need to specify their new categories in the Play Store listing, or they will simply default to the broader categories which are being retained. Developers will also need to adjust their Game Services configuration, but no changes to the actual APK files are necessary. 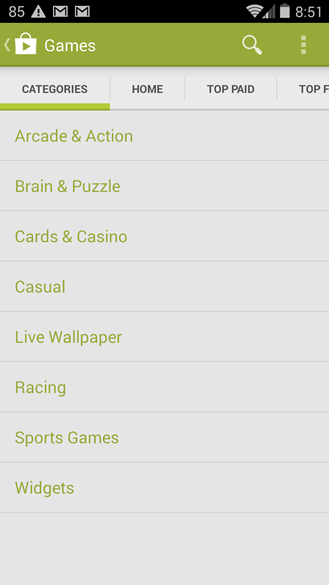 Yesterday Google+ user Andrew Jones-McGuire shared the Android Development video below with us - we're fairly certain that the new game categories are what Mr. Pham is hinting at.

The change is probably more for end users than anything else. The current categories are way too broad for effective genre browsing without resorting to a standard keyword search. Google has been making a lot of user-facing changes to the Play Store, including a much-needed in-app purchase indicator. (Not that this is in any way altruistic - games are big money, and Google takes its cut of every paid game and IAP.) Combine these latest moves with the Google Play Games services announced earlier this year, and it's easy to see that Google has gaming on the brain.

Viber 4.1 Update Enables Users To Make Calls To Landlines And Mobile Phones Via 'Viber Out'