The odds are against most people in the Android world having heard of TouchDevelop by Microsoft. From the start, it was designed to be used with a small touchscreen interface by hobbyists and intended to ease people into programming. Things haven't changed too much in that department, but the project has grown from its humble beginnings on Windows Phone to supporting iOS, Windows, Mac, and now Android. 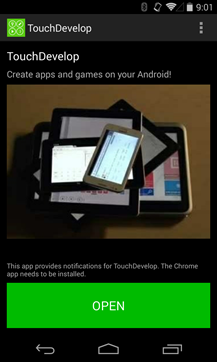 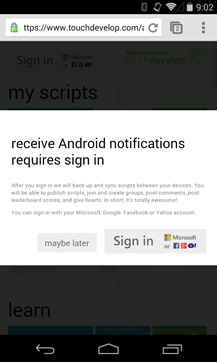 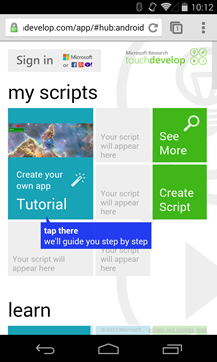 The app actually doesn't do very much, it only handles push notifications and acts as a shortcut to the website. All of the real action happens in Chrome for Android; both the Integrated Development Environment (IDE) and the scripts it creates are built on HTML5. While the app mostly follows the basic conventions for an Android app, the web site makes extensive (to the point of being painful) use of the Windows Phone design principles and iconography.

You can pretty freely browse and run most user submissions without signing in, but saving to the leaderboards or building your own scripts requires an account. Fortunately, TouchDevelop can be used with your option of a Google+, Yahoo, Facebook, or Microsoft (formerly Live) account. Regardless of how you proceed, you'll be presented with a long page of categories for different types of apps and games. If you just want to mess around, browse through the catalog and tap 'Run' if anything catches your interest. 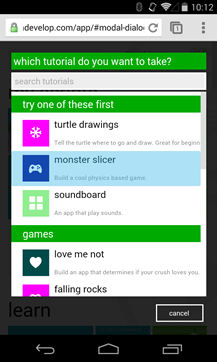 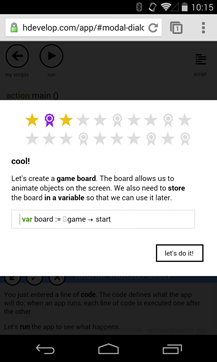 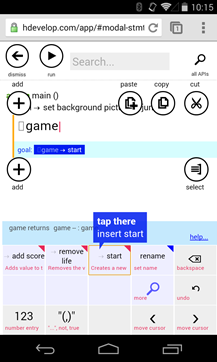 Most of the tutorials are completely guided and include a lot of single-step achievements, but they do a good job of teaching the scripting language and acclimating users to the interface. You'll be building games and applications right from the start, and it all happens pretty quickly. Since modern web browsers now allow access to most of the sensors, the apps can achieve most of the same things native apps can.

Once you've created an app, it can be shared with your friends or made public. If others are interested, they can make changes to your code and you'll be notified about what they've done. If you decide your creation could be a hit, it can even be exported as an app for Windows 8, Windows RT, or Windows Phone (7.5 and 8) devices. Sorry, there's no way to turn these into native Android apps.

TouchDevelop isn't about to turn anybody into a programmer with mad skillz, but it's easier to learn and certainly much closer to the real thing than most other introductory languages. The interface is very accessible and keeps the keyboard from appearing any more than absolutely necessary, which finally makes development on a phone a bit more palatable. If you're looking for a way to learn some basic principles of programming or just want to build some simple apps, TouchDevelop is free and might be worth checking out.

Pocket Updated To v5.1 With Cool New Quick Save Actions