The Moto X is undeniably one of the most important Android devices of 2013, and it's probably also one of the best. This phone can be had for a pittance on-contract, but many prospective buyers were disappointed the off-contract cost was so high. If $500 for this phone seems like too much, Republic Wireless is offering an alternative. The Moto X on this Sprint MVNO is just $299 and you can walk away at any time. The plans are also cheap because Republic relies on WiFi to share the load. 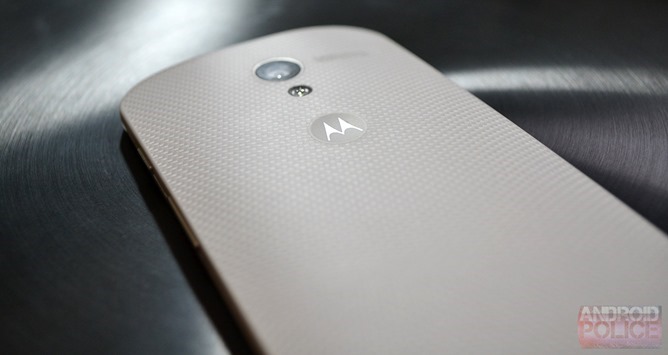 This is only the second phone Republic Wireless has offered to the general public, and some users experienced issues with the hybrid WiFi/cellular calling model before. Are things running more smoothly now? We've got the Republic Moto X to find out if it's worth your money.

Republic Wireless licenses the Sprint 3G and 4G LTE network, but the plans it offers are a little cheaper than other MVNOs – they range from just $5 to $40 per month. Republic Wireless is able to do this because its devices route calls and texts over WiFi automatically when it's available. You still place and receive calls with your regular phone number, but it isn't using the Sprint network as heavily. 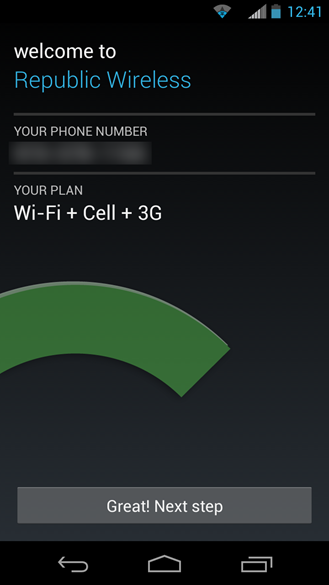 When you buy the phone, Republic Wireless offers you four different plans. The cheapest $5 option includes no mobile access at all – it's a WiFi-only device, but you can still call and text normally when you're connected. And indeed, all the plans include unlimited usage while on WiFi. For $10 per month you get voice and texting on the mobile network, but no data. Step it up to $25 and you have voice, text, and unlimited 3G data on Sprint while out and about. The top tier $40 plan includes unlimited talk, text, and 4G LTE data. Republic Wireless also allows you to change your plan up to twice each month. 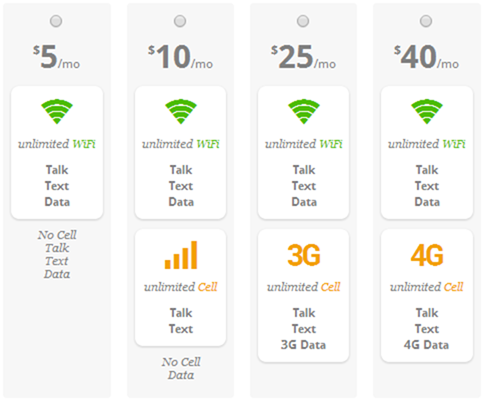 What does "unlimited" data mean in this context? I checked with Republic to find out what the current policy is, and it's surprisingly reasonable. Well, "unlimited" still doesn't mean what you might hope, but it's not bad. You get 5GB of data per billing period, after which your speeds can be throttled. It's not all gloom and doom, though. Republic Wireless will give you a pass on the throttling if you exceed the cap once in six months.

The other aspect of the hybrid calling capability is that your phone will actually switch from WiFi to cell if it loses connectivity in the middle of a call – for example if you leave WiFi range. This handover is one of the aspects early users had issues with, but we're going to dive into that shortly. First, let's talk about the phone.

This is an almost completely stock Moto X, so I'm not going to go into exhaustive detail about how the phone is – you've already heard all about it. It runs on the Motorola X8 platform, has always-on voice controls, and active notifications on the screen. It's a great device, and the 720p AMOLED screen is surprisingly good in real life.

There are a few user-facing changes to how this version of the Moto X operates. In the notification area is a persistent item from the Republic app that tells you if you're able to make WiFi calls or cell calls. If you're on WiFi, the icon is green and the notification is very enthusiastic. No WiFi? The notification icon is gray and seems a little distressed. When you make a call, there is a small bit of text on the call screen to remind you if it's WiFi or cellular. 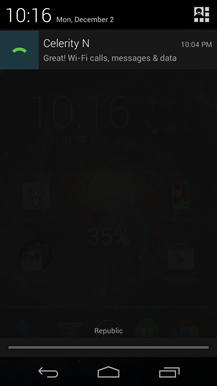 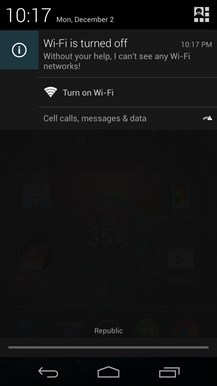 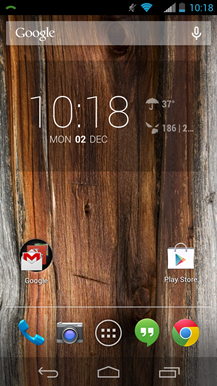 The notification that reminds you of your status is spawned by the Republic app, which is included on the phone and updated through Google Play. It's really just a standard app that tracks your account and places a high-priority notification on the device. In fact, you can even disable the notification in the Android system settings if you don't want to see it. It does plug into some of the deeper modifications for WiFi calling, so I can't promise disabling the notification is a good idea.

The app itself is actually very nice as far as carrier apps go. It's completely native, uses a slide-out navigation menu, and it's really responsive. The Republic app also includes settings so you can adjust the sensitivity of the handover and add a manual handover button in calls. 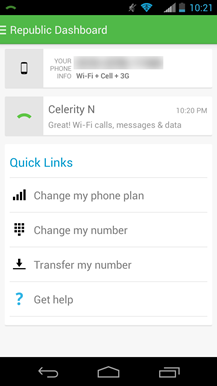 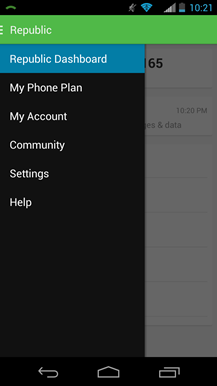 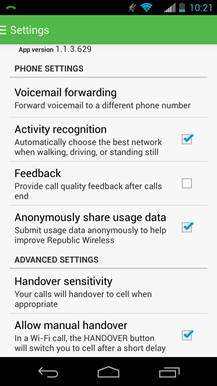 I'm pleased that the customization needed for Republic Wireless hasn't resulted in a lot of bloatware or unnecessary restrictions on usage. Although, native tethering is gone, not that I'm surprised. Basically, the way this phone works with Republic's hybrid service is very transparent to the user.

While the user-facing changes are extremely minimal, there is some more significant stuff going on behind the scenes that enables the WiFi calling and cell handovers. That means some changes to the ROM are needed beyond what Sprint does for its Moto X and longer waits for OS updates. The Republic Wireless Moto X runs Android 4.2.2 right now, while most variants have hit 4.4. I asked Republic if they had any firm plans for updates, but the best they could offer was an early 2014 timeline.

This version of the device will also not be supported for bootloader unlocking through Motorola, according to Republic Wireless. Any changes to the firmware would not jive with the Republic business model of hybrid calling, so that's one avenue not open to Moto X users on this network – at least not in any official capacity.

This is really what it comes down to – you need a phone that's reliable. It doesn't matter if it's a good deal or a neat device with lots of features. You'll have to go into your Republic Wireless experience knowing that it relies heavily on Sprint service quality in your area. If Sprint is not great around your stomping grounds, you're going to have a bad time and there's not much Republic can do about that. If you've got a solid Sprint LTE signal, the mobile data can be awesome. If you're stuck with a marginal 3G signal, not so much. 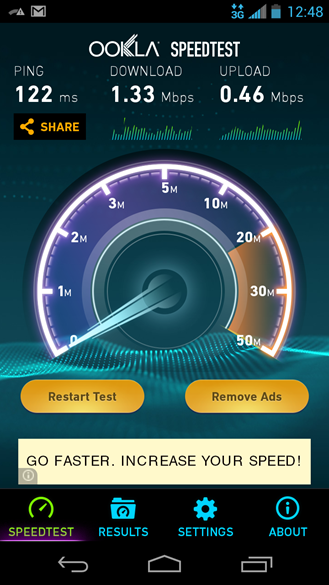 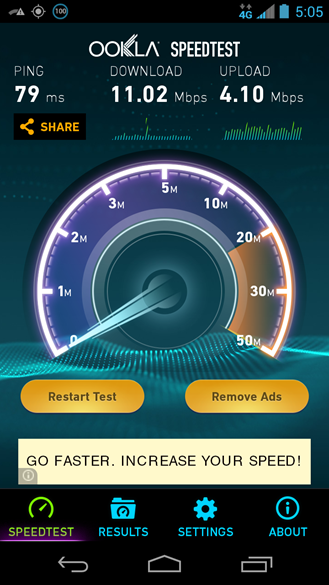 If you begin a call on WiFi, then lose connection because you've passed out of range, the call will flip over to cellular. I'm happy to report that I haven't had any of several dozen test calls drop while doing this. That's a vast improvement to the handover performance when Republic first launched.

There's always a little hiccup when you move from WiFi to cell. The call stays connected, but you don't get any audio on either end for 3-4 seconds as the mobile connection ramps up. You might think at first that the call has dropped, but it seems to always come right back. This has the potential to be confusing for the other party, but I've sprung this on a few friends and none of them saw it as anything unusual – cell phones do weird things sometimes and we mostly ignore it. 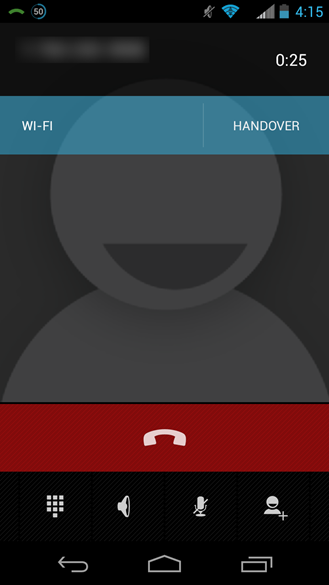 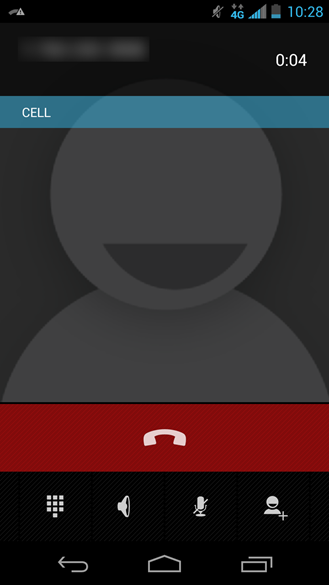 If the phone does make the handover from WiFi to cell during a call, it will stay there for duration of that conversation. You can't move in the opposite direction, from cell to WiFi.

I don't consider myself a stickler for voice quality in phone calls – I like to avoid them as much as possible. The WiFi calls on the Moto X sound good, perhaps a little better than the cell calls. No one has complained about not being able to hear me, and I can hear them just fine. As for SMS over WiFi, I have no complaints. It works exactly as you'd expect it to.

Is This The Phone You've Been Waiting For?

Republic Wireless offers a great value with its service. Even though you're not using the cell network as much, you really don't notice. Virtually all of the WiFi features are completely integrated into the experience you're already used to, so it's easy to forget that the phone is using WiFi data instead of a cellular voice connection. With the overall smoothness of Republic Wireless handovers, I don't think you have anything to worry about on that front. 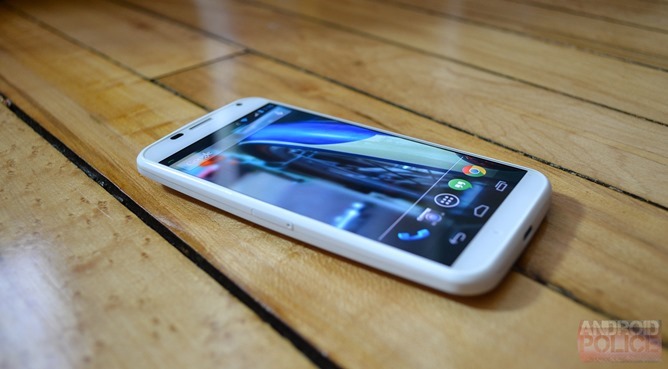 This phone is also a huge step up for anyone considering going with Republic. Before the Moto X, the only device available was the Motorola Defy XT – not exactly a crowd pleaser. The pricing is hard to pass up too. For $299 you get the phone and can leave at any time without penalty. Of course, the device won't work on any other networks, but you can sell it and recoup some cash.

In addition to the Sprint network consideration, you have to think about how the how the update situation will sit with you. The Moto X elsewhere either already has, or will soon have, KitKat. The Republic version is lagging a little behind, and will probably continue to do so. If a somewhat delayed update schedule and Sprint's network are not deal breakers, the Republic Wireless Moto X is a great buy. MOGA Hero And Pro Power Review: This Is Exactly How To Make A Better Mobile Controller