Last year, PowerA tried to change the game (quite literally) with its MOGA (later changed to MOGA Pocket) and MOGA Pro controllers. While the idea was great and execution was decent, there was still a lot of room for improvement with both. This year's models – the Hero Power and Pro Power – not only look to improve the overall form factor and experience over last year's models, but also bring more juice and the ability to charge your device while you play using the internal battery. Sounds great, right? Sure, but at $60 and $80 respectively, the question is are they good enough to warrant the price?

I've spent the last few weeks playing with both controllers, so it's time to breakdown how they're different and/or better than their predecessors, and find the answer to that big question. Let's dig in. 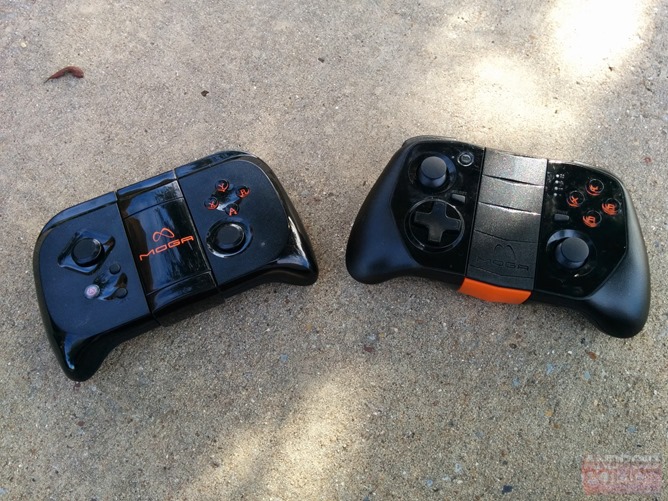 The Hero Power is basically re-vamped version of the MOGA Pocket (the original MOGA), and holy crap it is so much better. All of the annoyances with last year's model – like the need for replaceable batteries, the non-clicky joysticks, and lack of a D-pad – have been fixed. As much progress that's been made, however, there's still some work to be done. Before we get to that, though, let's take a look at what the Hero offers, and exactly what's different from last year's model.

The first noticeable difference is the size – the Hero is longer, thicker, and wider than the Pocket, which gives it a more comfortable feel when playing. It's not so much larger than it becomes difficult to carry, however – it's still very much a pocket-sized, on-the-go controller. I like that.

The button configuration on the Hero is also drastically different than last year's model, in that it not only has more buttons, but the existing ones have also been improved to be larger and more clicky. Fun fact: I like doing controller reviews just so I can use the word "clicky."

For example, the joysticks are now raised and clickable (like a joystick should be), instead of the strange recessed joystick on the Pocket. Directly below the left joystick is now a D-Pad, instead of that weird cluster of buttons with start, select, and the MOGA keys. That's a huge upgrade in itself. Start and select have been moved to either side of the arm that holds the phone, which feels far more natural. The Hero also has two sets of shoulder buttons now, as opposed to the single set on the Pocket. Rounding out the button differences here, the Hero's XYBA keys are slightly larger and more tactile, so they feel better. 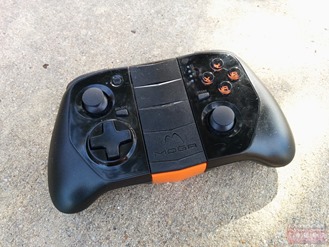 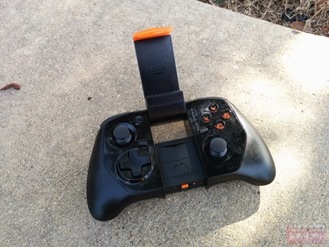 Overall the Hero feels a lot more grown up than last year's model, which is nice. My one complaint about the buttons is actually with the L2/R2 triggers: they feel more spongy than springy, which is an odd sensation. I don't really like the way they feel, but I'm still glad they're along for the ride since they were missing on last year's controller. Still, they feel weird and are just too mushy for my taste.

The Hero Power is packing an 1800mAh battery under its undersized shell, which serves as both the controller's primary power source and a means of charging your phone while you play. This is a massive improvement over the Pocket, which unfortunately used AAA batteries to power the controller. That said, a shared 1800mAh battery isn't going to provide a lot of juice for most modern phones, which typically have internal batteries that are much larger than what's provided in the Hero. In other words, it'll give you some juice, but don't expect to get a full charge out of it. On the other hand, if you never use it to charge your phone, it should be enough to keep the controller going for quite a while, which is nice. It's also worth noting that the controller battery must be above 25% before it will charge an external device (this applies to both the Hero and the Pro). 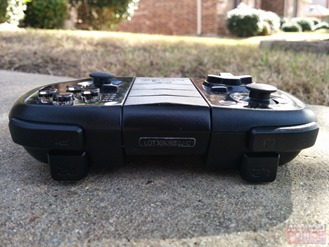 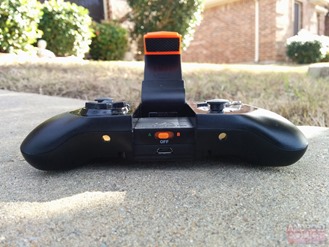 One thing I wish the internal battery did a better job of is adding weight to the controller. Don't get me wrong, the Hero's definitely heavier than the Pocket and it feels pretty solid, but once the phone is in the MOGA Arm, it's very noticeably top-heavy, which makes for a somewhat-awkward experience. I wouldn't call it a deal breaker by any means, but it's just another odd sort of sensation that you'll need to get acclimated to when using the Hero, especially for longer gaming sessions.

Like last year's model, the MOGA Arm has slightly tacky rubber pieces at the top and bottom that help hold the phone in place, and it works very well. The arm feels more robust than last year's model, and it's easier to insert and remove the phone, as well. Overall, it's improvements all around on the arm, which is nice. I never felt like my phone would fall out of the old model's arm, so the fact that this one is even better ensures even more confidence. 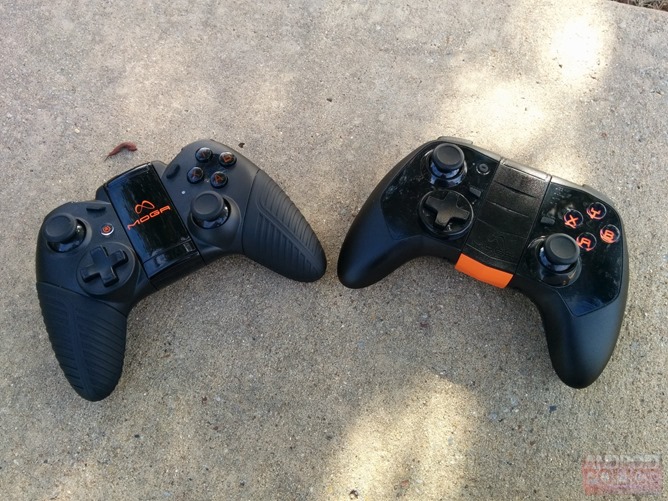 Now that we've talked about the portable little brother of the family, let's turn our attention to the big boy. The Pro Power is PowerA's "console experience" controller, and is much larger than the Hero. The button layout is essentially the same on both devices, though the joysticks, D Pad, and all the buttons are larger and more confortable on the Pro Power. Makes sense – why put tiny buttons on a big controller?

Speaking of buttons, unlike the Hero, the Pro's L2 and R2 triggers feel perfectly springy – the way triggers should feel. I'm not sure if the construction of the Hero limited the parts available for the L2/R2 buttons, but there's a very tangible difference between the two, and I prefer the Pro's ten-to-one over the Hero's.

The primary difference in layout between the two is actually with the USB ports: both of the Pro's USB ports (full-size for charging devices, micro for charging the controller) are on the back, whereas the Hero's full-size USB port is on the back and the microUSB charging port is on the front. That doesn't really make a big difference in how the controllers are used, but it's a small detail worth pointing out. 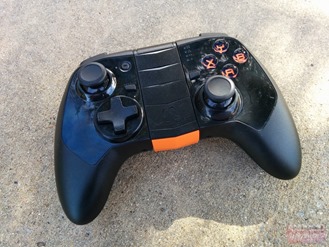 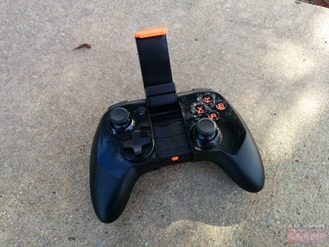 The Pro Power features a larger, 2200mAh battery, which will not only keep the controller charged longer, but also will provide a slightly larger bump should you elect to charge your phone while gaming. If not, then the Pro should theoretically outlast the Hero when it comes to play time, as well.

Between the larger battery and bigger overall form factor, the Pro does an excellent job of feeling balanced, especially with the phone mounted in the arm. It doesn't feel top-heavy that way, but it also doesn't feel unreasonably heavy when used with something like a tablet that can't fit in the arm. The weight definitely gives it a solid, more console-quality feel, which anyone who would be considering either of these controllers should appreciate.

Compared to last year's Pro, the Pro Power feels like an upgrade in nearly every way – it seems sturdier and more robust, the buttons are more comfortable, and it just feel like a more premium experience. That's hard to argue with.

Update: Someone in the comments asked if the Arm on the Pro is long enough to hold a Nexus 7. I actually meant to address this in the original review – the answer is unfortunately no. This is a pretty big oversight in my opinion, as the ability to strap a small tablet in would be killer. 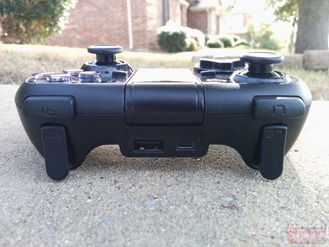 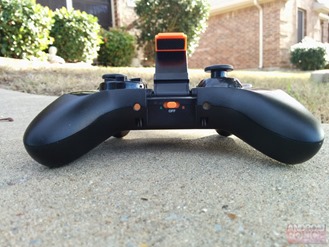 The gaming experience hasn't really changed a lot since last year – you sync the controller using the MOGA Pivot app, find MOGA-compatible games, and get your game on. The list of compatible games, however, is constantly growing – there are nearly 100 more compatible games from when I reviewed the original Pro last year. There were 76 at the time, now there are roughly 175. That's a lot of games. And with HID mode, you can use the controller with emulators and other games that may not necessarily have MOGA support out of the box, which dramatically increases the usefulness of this duo, no matter which one you choose. 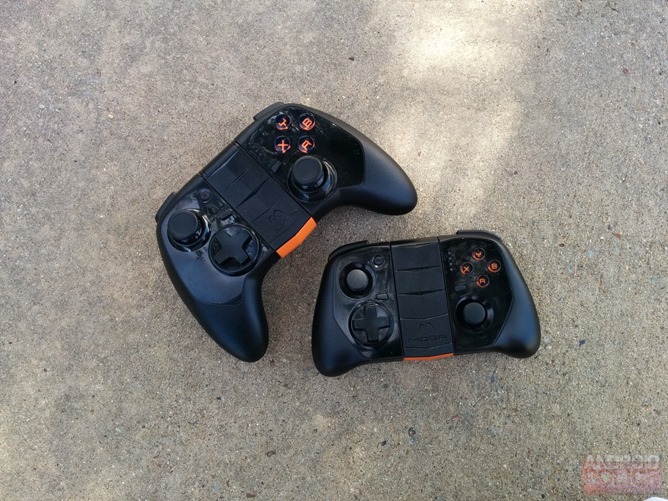 At $60 and $80 for the Hero and Pro respectively, you have to throw down a solid chunk of change just to improve your gaming experience. The question is, is it worth that to you? I'd say that depends. If you game on your phone a lot and are tired of touch controls (or never liked them in the first place), then these MOGAs will likely be worth their asking price to you. They're both solid, feel great, and definitely improve gaming on your mobile – there's no doubt about that.

The next dilemma is which one to choose – do you go with the smaller, lighter, more portable Hero, or the robust, console-size Pro? While the Hero isn't what I'd call "bad," if I were throwing my own money down on one of these, I'd go with the Pro. The overall size and feel, coupled with the additional weight and larger battery, easily make it worth the extra $20. Of course, it's a larger controller, so it's also less portable – again, a tradeoff that I don't find to be that big of a deal. It's not like game controllers aren't really that portable in the first place (unless we're talking about the Wii U's gamepad, which is an entirely different story).

With that said, if you only have a very limited amount of money to spend or you happen to catch the Hero on sale (at the time of writing it's going for just about $45 on Amazon), then by all means, buy it. While I prefer the Pro, I can't say it's worth nearly double the cost of the Hero. And the Hero is still a massive improvement over last year's model, so it's really a win-win. It's all about how much you're willing to spend.