Since its introduction, Google Glass has been in the unfortunate position of having relatively limited functionality. However, with a steady stream of updates and eventually the emergence of the Glassware tab in the MyGlass interface, we've known the elusive wearable was due for some more exciting things. A few weeks after announcing plans to add Play Music to Glass, Google has quietly added it to the list of apps supported on the elusive wearable. Alongside this release, the Accessories store also launched the Stereo Earbuds at the hefty price of $85.

Music can be activated by simply calling out 'Ok, Glass, Listen to' followed by the name of an artist, playlist, album, or song. Assuming your search goes well, a 'Live Card' appears to the left of the central clock with the artist name, song name, play time, and cover art as the background. If you tap while viewing the card, you're presented with a basic list of commands: Pause, Next, Previous, Radio, Stop, and Volume.

You'll continue to hear your music in the background even while navigating through cards, and it won't interfere with the 'Ok, Glass' hotword detection when you're on the clock screen. Should you remove Glass from your head or begin a voice command, playback is automatically paused until the command is completed or you've put the headset back on.

Unfortunately, there are a couple of sticky issues that might be a little annoying. For one, songs you've already played are placed in your timeline, but there's no way to pick new songs or playlists without going through a voice search. Unfortunately, this means you'll either have to be prepared with playlists built elsewhere or rely on the Radio command to get any sort of a queue going. The screen is also kept awake during playback, rapidly eating away at the already short battery life. 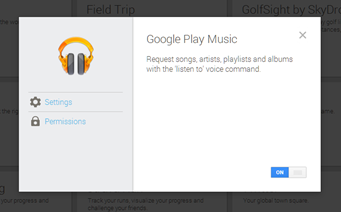 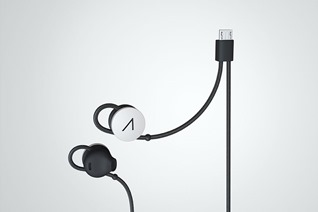 Installation is a breeze. Just hit the Glassware section, click on Google Play Music, and flip the switch to 'On'. If you're anything like me, you might already have several devices (including duplicates) activated with Play Music. If that's the case, you'll just have to go through the Deauthorization Dance by removing a device from the list in Music Settings. It should only take a couple of minutes for installation and authorization.

To get the best out of playing music from Glass, you might consider splurging on some brand new stereo earbuds. At $85 for the custom pair, they certainly aren't cheap; but it's about the only way to get lopsided earphones that fit Glass's unique requirements. If you're in the market, you can pick some up in the accessories store.

While Play Music is only the third Google app to make an appearance as an installable after Field Trip and Google Now, it's a good choice. It's not like Glass needed another way to eat up battery life, but this is definitely a lot of fun to play with and feels like an incredibly natural feature to have. Hopefully a few iterations will work out some of the bugs and bring an expanded feature set, but this is a great start. Keep it going Team Glass!