The 1080p update to the Nexus 7 is all the rage at the moment, but that doesn't make the original Tegra 3 version from 2012 any less worthy. And since it's now being discounted just about everywhere, it's considerably more worthy than it might otherwise be. Case in point: Groupon is offering the WiFi tablet on its online-only shopping portal at $119 for the 16GB version, $149 for 32GB. 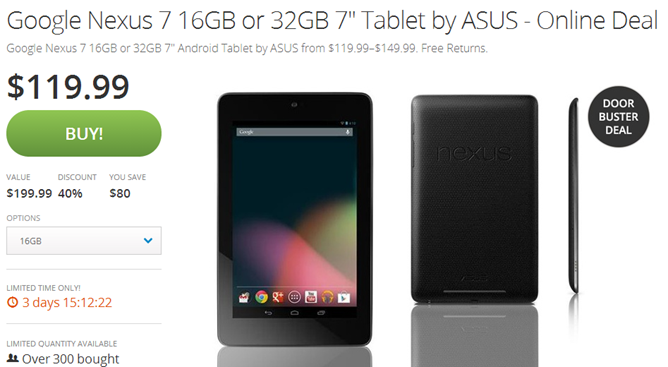 These are new tablets according to the description, which technically puts the discount at $80 and $100, respectively. Now obviously that's not accounting for the new model: Amazon is currently offering the 32GB model for $194, for example, and Staples has a one-day coupon that brings it as low as $130. Even so, it's good deal on a solid tablet (currently running Android 4.4!) with free shipping to boot, and free returns if you're not satisfied.

The deal will be valid for another three days, but quantities are limited, so you might want to get an order in soon. Unfortunately Groupon is only shipping to the lower 48 states  - Alaskans, Hawaiians, and Canadians need not apply. You're allowed to purchase as many as three for yourself and another two as gifts, so if you like your stocking stuffers extravagant, let your fingers do the walking to the source link below.

[New Game] The BBC's Doctor Who: Legacy Comes To Android With Fun That's Bigger On The Inside