The AT&T-branded Samsung Galaxy S4 is once again getting its Android 4.3 update as an OTA. After an unexplained issue with the last Android 4.3 push, everything looks to be getting back underway according to Samsung's site and early reports on XDA. This is a big update for the GS4, but AT&T is probably going to take it slowly this time. 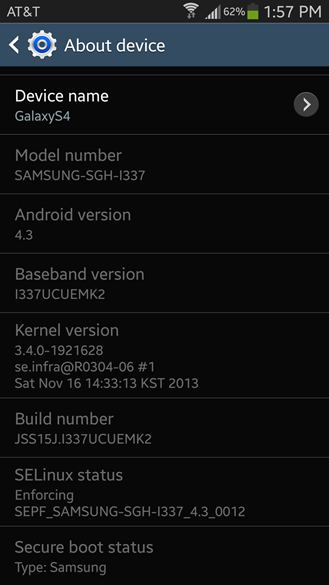 The new update is build number 1337UCUEMK2 – the last one was 1337UCUEMJ9. So Samsung had to change something, but the very short turnaround time indicates it wasn't anything major (some users reported keyboard issues on MJ9). The update is pretty hefty at 719MB if you're coming from the Android 4.2 software. There is also a patch from MJ9 to MK2 for people who got the last OTA that clocks in at just 28.07MB. Begin hammering the update button – no promises, though.

AT&T, T-Mobile, And John Legere Get Into Twitter Slapfight Over Single Customer, Because ...