The Angry Birds franchise has thus far been on the lighter side of the free-to-play model - the original game launched free and ad-supported on Android, and later versions added small charges for HD versions and a few in-app bonuses like the Mighty Eagle. But it looks like Rovio is pulling out all the stops when it comes to the upcoming kart racer, Angry Birds Go. Pocket Gamer reports that gamers in New Zealand (where the game is getting an early launch on iOS) are finding it positively stuffed with in-app purchases. 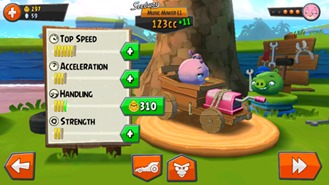 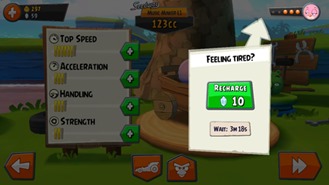 The game apparently includes just about every kind of IAP scheme you can think of. It's got the dual-currency system for upgrades and kart purchases: coins and gems, the latter of which you can buy with real money. It's got a time-based wait system, most frustratingly demonstrated with EA's Real Racing 3: your bird gets tired after five races, after which you'll have to either tag in another bird, pay Gems to "re-energize" it, or wait until it's ready to go again. And if that wasn't enough, Angry Birds Go uses the Hasbro Telepod system for zapping in unlockable characters and bonuses with toys from your local retailer, in the same vein as Skylanders and Disney Infinity. This was previously seen in Angry Birds Star Wars II.

It might seem obvious from the fact that Rovio has turned Angry Birds into a world-striding colossus of a mobile franchise, but they really don't seem to care any more. Angry Birds Go shows all the symptoms of a game and a developer that are interested in wringing as much real cash out of gamers as possible. The in-app purchases for Gems have the usual markups, and gamers can purchase upgraded karts directly - the most expensive and presumably fastest is a full £69.99 or $99.99. This kind of extravagance isn't unusual from developers who wouldn't know restraint if it smacked them with a two-by-four, but it's disheartening to see it from a developer that was previously so reasonable. 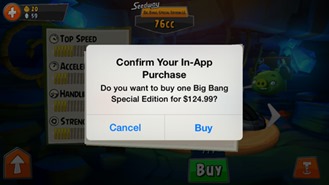 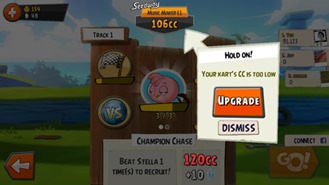 It's a shame, too: Rovio delivers rock-solid games with reliably balanced mechanics, and Angry Birds Go is their most ambitious technical project to date. If anyone can get the casual crowd into a racing game, it's them. But I predict that Rovio will have a lot of frustrated fans on their hands after the first few racing rounds, much like EA did with Real Racing 3. And if they continue down this path, we'll be looking at new Rovio releases with the same tired cynicism as Glu and Gamevil.