The Kyocera Hydro Elite may not be a top-of-the-line device, but it comes with something most phones don't - water resistance. It also packs 4.3-inch display and a 1.5GHz dual-core processor, making it an admirable midrange handset. Now Verizon is distributing the first OTA for the phone, and while the Android version number remains the same, this update impacts many areas of the device. 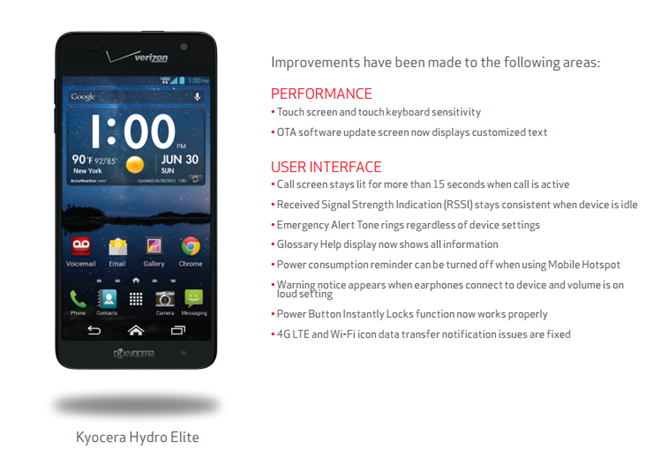 The touch screen's sensitivity has been adjusted, including the virtual keyboard, and the call screen now stays lit for over 15 seconds when active. Using the power button to instantly lock the device should now work as intended, and issues surrounding the 4G LTE and Wi-Fi icons have been fixed. Interestingly, this OTA also tweaks the software update screen, for when the next one of these comes around. The speakerphone volume has been improved, using Bluetooth should be more reliable, and, of course, some of Verizon's pre-installed apps have been updated.

This is just scratching the surface. To view the full two-page list of changes, hit up the PDF provided below.