If you've been hankering for a Samsung Galaxy Note 3, the high price for Verizon's contract phone may be off-putting. Wirefly is offering the Verizon Note 3 for $199.99 with a new contract, but Amazon has one-upped them - they've got the same phone-contract combo for just $169.99. The price for both is $249.99 ($50 off Verizon's price) for returning customers. 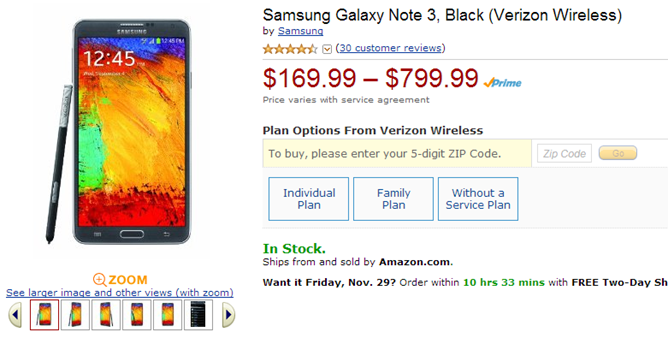 You could take the view that Wirefly has a better deal here, at least if you're willing to wait. They're offering a free $40 prepaid Visa debit card if you also port your number into Verizon. But those generally take a while to be shipped to you (and I've taken advantage of deals like this where they mysteriously disappear), so I'm giving Amazon pride of place on this particular sale. Both retailers want just shy of 800 American greenbacks for an unsubsidized device, which you can get from a Verizon store for $700.

The Galaxy Note 3 is eligible for free Prime shipping if you're a regular Amazon shopper, but Wirefly shoppers get free standard shipping with no strings attached. If you're hunting for even better deals, some of the carriers and resellers might have them during the usual Thanksgiving and Christmas sales, but $100-130 off is nothing to sneeze at.