If you've been waiting for your magenta-flavored Galaxy S4 to get its long-awaited Android 4.3 update, check your notification bar now. According to both T-Mobile's official support page and some evidence from the denizens of XDA, the phone is getting its final Jelly Bean release as you read this. 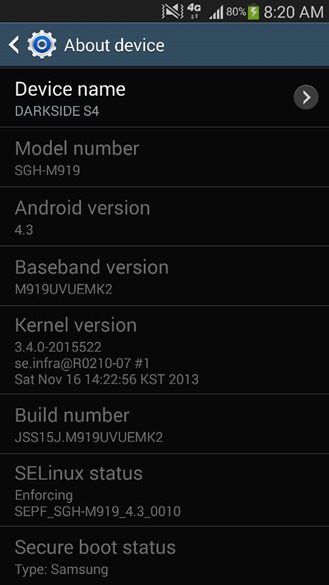 The 4.3 update for this and other Samsung phones packs more than the usual updated software: it also makes Samsung's later phones compatible with the Galaxy Gear smartwatch, previously restricted to the Galaxy Note 3. Other changes in 4.3 include the usual updates to core Android, plus visual tweaks for the TouchWiz interface, Samsung's KNOX security update, and a few adjustments and bug fixes. The download is an absolutely massive 781MB, so you may want to wait till you get in WiFi range or do the whole thing over the Kies desktop software.

If T-Mobile follows its pattern the update will go out in waves, so be patient if you don't see it right away. As always, those of you who have rooted your phones should assume that the update will break root, and that there may not be a method for getting it back immediately. If you rely on root apps or other modifications, wait until the folks in the Android community crack that sucker open. Tired Of Your Device's Stock Camera? It May Be Time For 'A Better Camera' [Sponsored Post]