Earlier today we shared the kernel source and framework files for the Google Play edition HTC One that have been posted on HTCdev, a sign that an OTA possibly wouldn't be far off. As it turns out, it wasn't. An update is now rolling out to device owners. Here's the proof, courtesy of a user on XDA Developers. 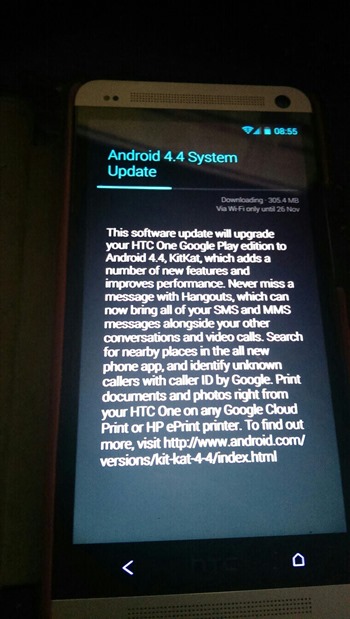 Another user has posted flashable zips, but, of course, there's also the option to play it safe and wait. We can't say precisely when the OTA will hit your device, but you can expect it to land any moment now.

Motorola may have beaten the Google Play edition HTC One to the punch, but this is still a pretty fast turnaround. This rollout is less than a week behind the Nexus 4's, after all. As for owners of the Sense version of the device, HTC has promised that your KitKat update will arrive early next year.