When Samsung introduced its gigantic yet frugal Galaxy Mega line, I had a feeling that it would be a hit with smaller and more budget-conscious carriers. Lo and behold, Metro PCS is the latest US carrier to get a branded version of the ginormous Galaxy Mega 6.3, starting on November 25th. AT&T, Sprint, and US Cellular have already released the phone. After a $100 instant rebate, the phone costs $399 on a MetroPCS contract-free plan. 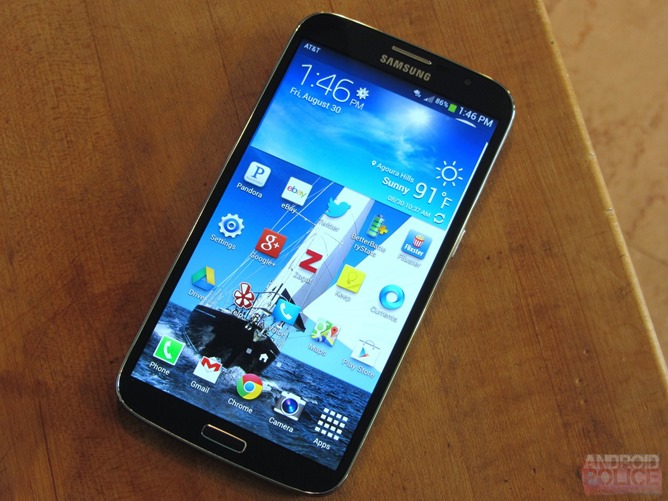 The Galaxy Mega is for users who want a huge screen and don't much care what else is inside. The 6.3-inch LCD screen has a 720p resolution, making it closer to a 7-inch tablet (that just happens to make phone calls) than a more conventional smartphone. The rest of the specs (1.7GHz dual-core processor, 1.5GB of RAM, Android 4.2.2 plus Samsung's TouchWiz, an 8MP rear camera) are alright, but definitely below high-end devices like the S4 or Note 3. MetroPCS isn't saying how much storage the branded phone has, but I'm betting on 8GB plus the MicroSD slot.

The mid-tier specs and huge, relatively low-res screen do have one advantage: combined with a massive 3200mAh battery, the Galaxy Mega should have decent longevity. You can check out David Ruddock's exhaustive review for a good look at the hardware. MetroPCS is offering an extra $50 off the price if you're a new customer and you sign up in a retail store, bringing the total price down to $349 - not bad at all.

BELLEVUE, Wash. (November 21, 2013) – Consumers deciding between a smartphone and a tablet now have the best of both worlds with the introduction of the Samsung Galaxy Mega™ from MetroPCS, a brand of T-Mobile US, Inc. (NYSE: TMUS). The Galaxy Mega brings the convenience of a smartphone together with the display power of a tablet for as low as $349 plus tax, after instant rebates, making it easily affordable to have a phone and computer in one without paying the price for both. The smartphone will be available on November 25 in MetroPCS stores and online, including in 15 new MetroPCS markets that are launching today, giving even more consumers access to nationwide 4G LTE at a tremendous value.

Riding on T-Mobile’s nationwide 4G LTE network, the new Galaxy Mega can be paired with any of MetroPCS’ affordable unlimited data, talk and text service plans starting at just “$40, period” – taxes and regulatory fees included. Consumers in all 45 MetroPCS markets will be able to take advantage of MetroPCS’ unlimited no annual contract wireless service and great phones like the Galaxy Mega to get even more from their wireless service.

“MetroPCS wants consumers to get the most for their money, and by eliminating the need and cost of two separate devices and delivering a premium 4G LTE mobile experience for as low as $40 a month, we’re providing quality and value in a mega way,” said Tom Keys, COO and executive vice president of MetroPCS. “The Galaxy Mega offers a large screen experience on-the-go with the portability of a smartphone and the larger viewing display of a tablet and we’re delivering it on an advanced nationwide 4G LTE network.”

To celebrate the holiday season, MetroPCS will offer a $100 instant rebate on the Samsung Galaxy Mega’s $499 price tag at launch, so consumers can walk out with a great phone for just $399 plus tax. New customers purchasing the Galaxy Mega in-store can also take advantage of an additional $50 instant rebate, dropping the price even more to the low cost of $349 plus tax. Both rebate offers are available for a limited time and are a part of MetroPCS’ holiday promotion that starts today.

With a 6.3-inch HD Super Clear LCD screen, the Galaxy Mega packs a number of innovative features Samsung Galaxy users have come to expect into its sleek body, including:

[New App] FlightTrack 5 Is A Complete Redesign Of The Travel App With Real Time Alerts, Flight ...