Do you dream of leading Earth's Mightiest Heroes into battle... in the fashion of a 1992 JRPG? The Marvel's Avengers Alliance is for you. This game got its start on Facebook before jumping to iOS, and now it's here to grab a few Android users before they go back to re-watching the Captain America DVD.

The game is a lot like Marvel's War Of Heroes, except with a more story-focused campaign and no collectible card game pretense. You're a rookie SHIELD recruit who's tasked with assembling the Avengers (and a bunch of random Marvel characters that tend to float among the universe's many, many super teams) to fight the staple bad guys. Naturally each hero has his or her strengths and weaknesses, and you'll need to strategically use them in turn-based RPG-style combat to best meet each challenge. 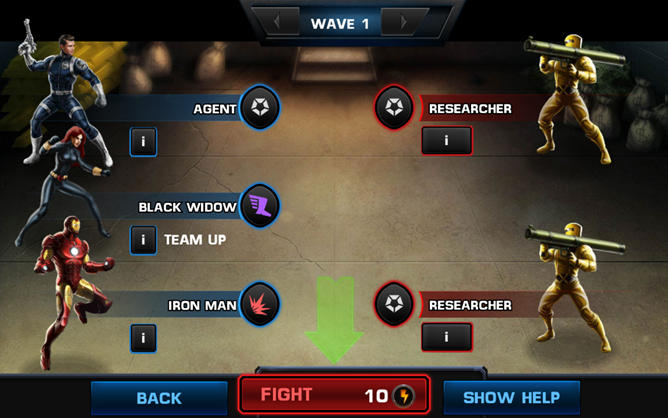 Unfortunately, the game has a lot more in common with ancient RPGs, like animation that's barely noticeable, an interface that would need a lot of work even before it could be called "cumbersome," and lots of still-frame text crawling to flesh out the story. Though the character models are pretty, you're really only going to see a few frames for each one - not exactly the visual splendor that you'd expect from the comic book source material. You'll need an Internet connection to play, and multiplayer isn't available at launch.

Other aspects of the game are depressingly modern: it's got both a power cool-down and a huge focus on in-game currency in two flavors. You guessed it, that means a big push towards in-app purchases. If you really need to scratch your Marvel itch, you might want to check out Marvel Puzzle Quest instead... or just read some of the comics in Comixology. It might be cheaper in the long run.