There is a growing selection of third party cases already available for the Nexus 5, but Google's offerings, tucked away at the bottom of the Play Store page, are poised to be the first ones many people see. There are two types of cases available: the official bumper case and the LG QuickCover. Liam provided a quick look at the former option already, but what about the latter? It's a solid, snug-fitting case that I strongly want to recommend, but at $49, doing so doesn't come easy. 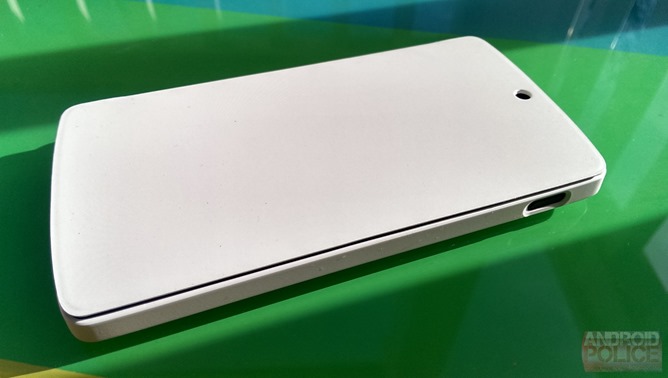 The Nexus 5 is a plastic phone, and though it's very well put together, it feels a little too frail for my tastes. The QuickCover case gives it a more solid feel. It hugs the phone very snugly, and while it doesn't feel quite as soft as the phone itself, the case still feels great in the hand, and the material lining the inside of the cover feels even better. The exterior is still plastic though, and there will be no confusing it for anything but. 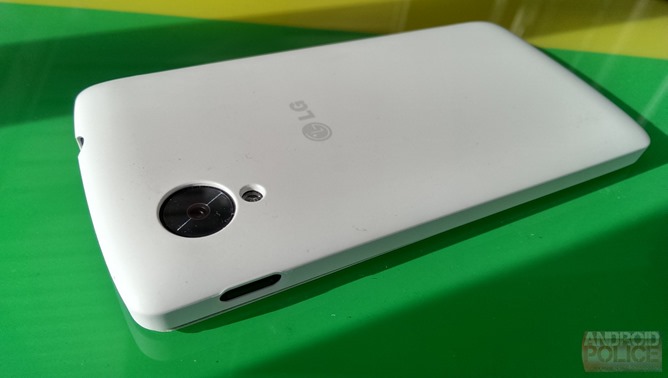 It could be thinner, for the backing extends out farther than the Nexus 5's protruding camera. But as it is, the QuickCover is sturdy enough to stand up on its own. In fact, the entire thing, including the flimsy looking cover, is very rigid. I actually popped up one of the corners of my Nexus 5's backing as I attempted to take the it off (but don't worry, the corner popped back in just fine). 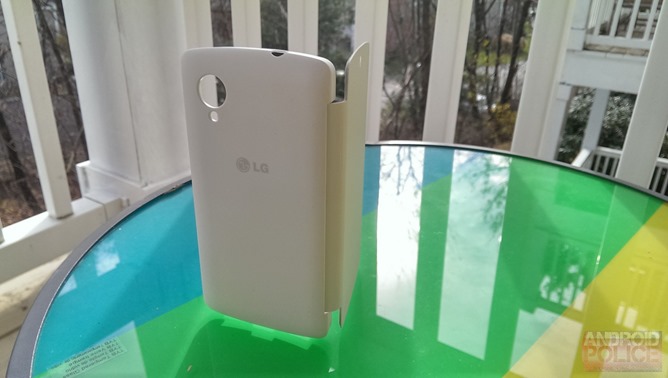 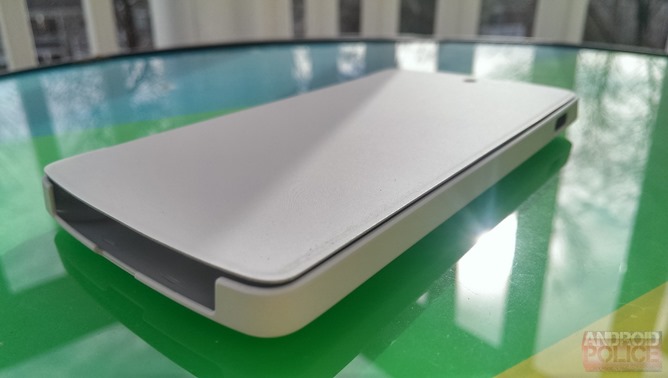 Conversely, the QuickCover is extremely easy to put on. This is especially good considering that the instructions it comes with aren't exactly helpful. I couldn't quite make out just what LG was telling me to do, but thankfully nothing was needed to get the case on other than general intuition. Start at the top of the device, pop it in, and then press down on the bottom. 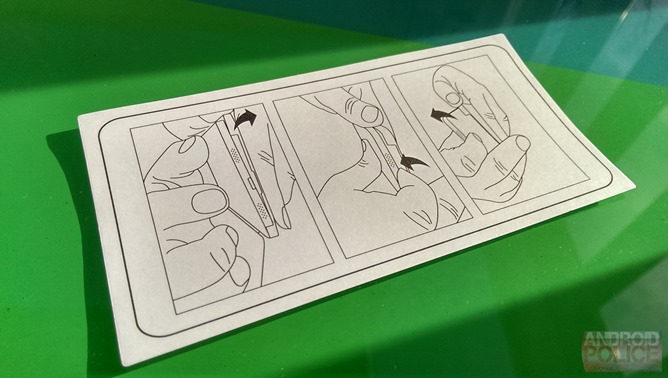 This case is available in both black and white. Going with white is always a gamble, as it isn't likely to hold up as well over time as a black case would. This seems to be especially true for the QuickCover. Just placing it on a table or trying to remove the phone from the case has left unwanted marks. Thankfully, I haven't yet had any trouble removing them.

Though a case only really needs to do one thing to excel at its job, some offer a little extra, and the QuickCover is one of them. Flipping open the cover will automatically awaken the Nexus 5, and closing it will put it back to sleep. It's a nice feature that can help prevent wear and tear on the power button.

Unfortunately, the case feels designed to reduce just how often you use any of the buttons. Pressing the power button requires an extra bit of effort when the case is on, like you're trying to poke something that's been placed at the base of a shallow hole (okay, that's precisely what you're doing). 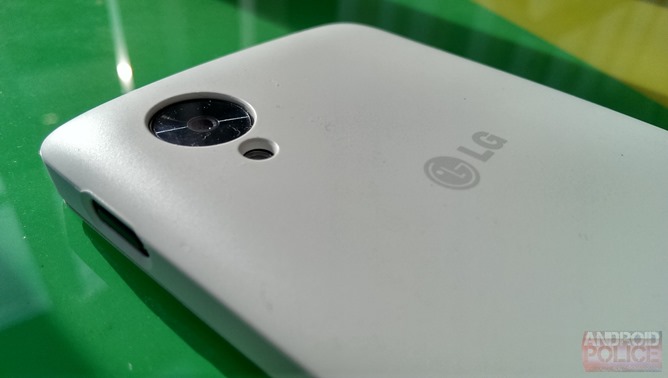 The volume keys fare worse. Since the Nexus 5's are situated on the left side of the device, the cover blocks them whenever it is closed. On the positive side, there are grooves in place to mark where the buttons are, making adjusting the audio very easy. On the negative side, trying to toggle sound while you're actually using the phone is an absolute pain. It's possible, but forget about doing it one-handed. 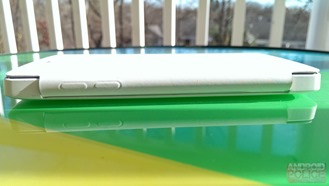 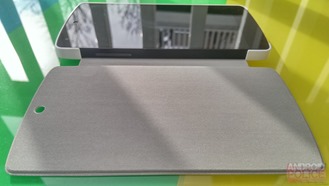 The other openings are just fine. The bottom-facing speaker is not hindered in any way, and there's an opening cut in the cover for the earpiece in the front. The charging port at the bottom is perfectly accessible, and I had no trouble plugging earbuds into the headphone jack at the top. It's worth noting, though, that there isn't an opening for the LED notification light. I'm not sure I would want a second hole in the front of the cover, but it's still a hindrance nonetheless. 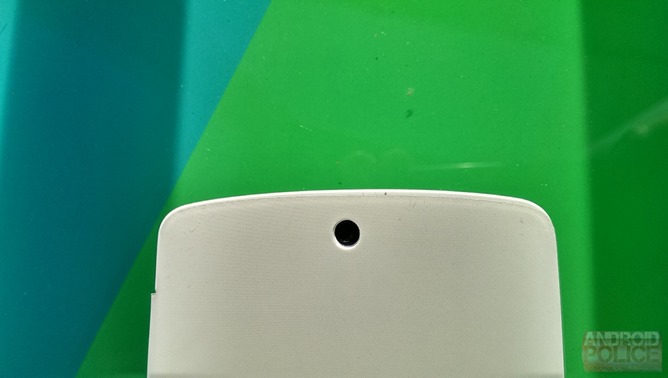 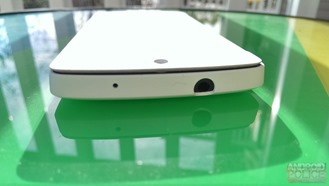 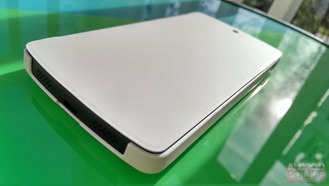 This is a portfolio case, and that inherently introduces some issues. The Nexus 5 won't be as easy to use as an actual phone, as you will first have to flip over the cover to even see who's calling, and you then have to fold it back if you intend to hold the device to your ear. I don't count that as a strike against the QuickCover, though, as customers already know this going into the decision. As impractical as portfolio cases are, they're the type I'm most inclined to use. I could say it's because I enjoy the extra layer of screen protection they provide, but really, I just like how they look. This case does not disappoint me in that regard.

But at $49, the QuickCover is tough to recommend. It looks and feels like a well-made case, but it doesn't have the premium look I would expect from something so costly. It's $15 more expensive than the Portenzo Hardback, a case for the Nexus 7 that's both handmade and significantly bigger. As nice as the QuickCover is, it needs to offer more in order to be truly compelling.

All that aside, it's a good case. I like it, and if money isn't an issue for you, then there's a decent chance you will too.

Motorola Wises Up, Stops Voiding Warranties On Developer Handsets For Unlocking, Will Start ...