The Galaxy Note II came out over a year ago rocking Android 4.1.1. That was great at the time, but now that a giant KitKat statue is standing up in front of the Googleplex, it's time to move things along. Samsung never bothered with bringing 4.2.2 to the Note 2, but customers will likely forgive them now that 4.3 is rolling out to devices across the globe. It's moving in phases, though, so for the time being the only models to start receiving the update have been the GT-N7100 and the GT-N7105. 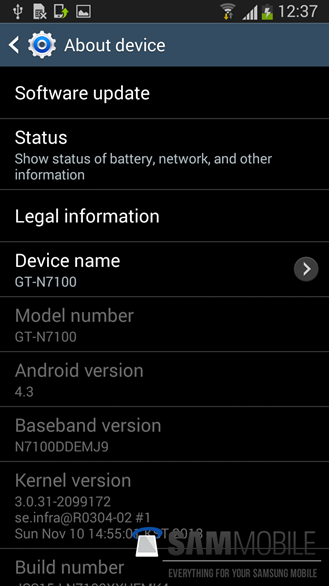 In addition to Android 4.3, this update introduces support for Galaxy Gear smartwatches, Samsung KNOX, and Samsung Wallet. It updates many of the Note II's stock apps and speeds things up under the hood with better RAM management and newer GPU drivers. The core UI now matches that of the Galaxy S4 and Note 3.

The leak we shared last month suggests that the AT&T and Sprint Note II will start receiving updates tomorrow, with Verizon following on the 29th, and T-Mobile's coming on December 2nd. These dates aren't set in stone though, so stay tuned. [Hell Freezes Over] The Moto X On Verizon Gets The First KitKat Update, And It's Starting Today