We figured that Motorola would be among the first to roll out Android 4.4 updates to their phones, considering the company's relationship with Google. But I don't think anyone suspected that the company would begin rolling out software updates within the month. According to an anonymous tipster, Verizon is beginning the soak test process for the Android 4.4 update to the Moto X, a strong indicator that it could be sent to all the Moto X units on Verizon within a few weeks. 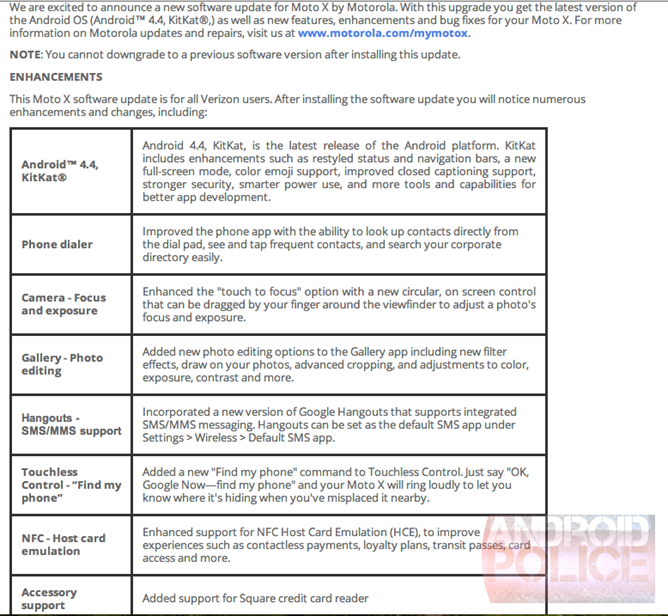 For the uninitiated, a "soak test" is essentially a beta test for new firmware - Verizon and Motorola are inviting a very select number of users (usually those who are active on support forums) to try out the new software and report any problems or concerns. According to the leaked screenshots, the next soak test for the Moto X will indeed be KitKat. The chart above indicates that pretty much all of the important features added in Android 4.4 will be making it to the Moto X. Considering how light the customization is on that particular phone, it's not surprising. It is surprising to see Verizon move so quickly on an update - the carrier has frequently been criticized for a slow update process, especially for large updates like full Android OS versions. While we don't have any tips to indicate it, it's reasonable to assume that Motorola (if not its other carrier partners) is quickly working to bring the 4.4 update to other versions of the Moto X and the nearly identical 2013 DROID line.

Motorola has confirmed that all versions of the Moto X, plus the DROID Ultra, DROID Maxx, and DROID Mini, will receive Android 4.4 updates, but has not publicly given a timeframe for the update itself. The upcoming Moto G is scheduled to get an Android 4.4 update in early 2014. Aside from the standard KitKat features, the software changelog for the Verizon Moto X includes updates to the Touchless Control and camera apps that are already available on the Play Store, plus support for Square's external credit card reader.

Verizon's soak tests usually precede a public software update by 2-6 weeks, though the somewhat confidential nature of the soak test program means there will be no official timeline.

Google Is Working On A New Camera API, But It Wasn't Ready In Time For KitKat