Back in mid-September, we reviewed the G-Project G-Boom, a killer Bluetooth boombox that easily slaughters everything else in its price range. It's a beast.

Since it's so good, we decided to check out the rest of G-Project's offerings: the G-Go, G-Grip, G-Pop, and G-Zip, arranged from largest to smallest (the G-Boom is the largest of the bunch). In short, they're mostly as good as their biggest brother, albeit on a smaller scale. Let's get to it. 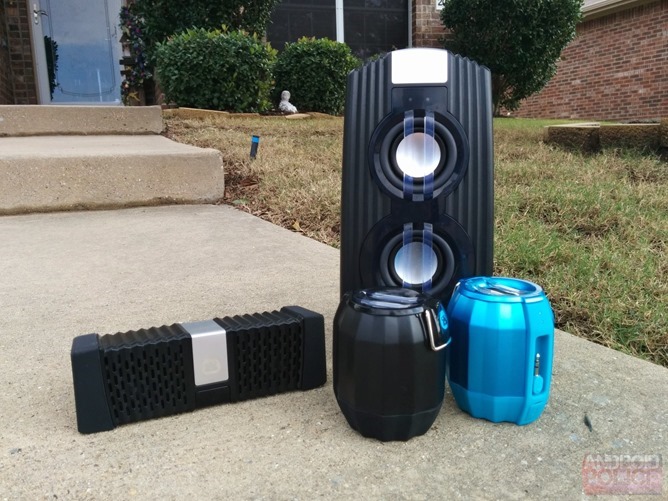 The G-Go's sort of an oddity in the G-Project speaker family, as it's the only one that isn't rechargeable. It can be used two different ways: on four AA batteries (nope, not kidding), or plugged directly in with the AC Adapter. I can only assume its $70 price tag is what kept G-Project from throwing a rechargeable battery pack in the Go, but I can't help but feel like that's going to be a dealbreaker for most. G-Project claims the Go should be able to get about eight hours of use on one set of AA batteries (unless you use the full-size USB port on the back to charge your phone whilst streaming tunes), and I found that to be basically spot on. It got me through the majority of a workday before temporarily kicking the bucket, but of course if you're out in the elements and have it cranked the entire time, you're likely going to get less. Still, eight is a good round number that I feel comfortable about stating.

Update: G-Project reached out and let me know that the reason for choosing to go with AA batteries instead of something rechargeable was for camping and extended outdoor activities without power. This way you can throw a few packs of batteries in your bag and have tunes the entire time. Makes sense. 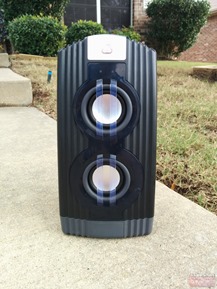 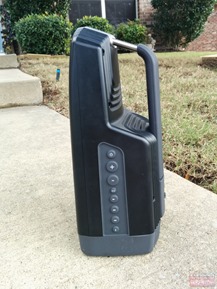 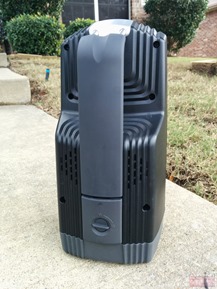 Past the battery oddity, the G-Go is a pretty decent little(ish) speaker. One of the most notable features is that it's water- and splash-proof. G-Project even touts that you can take this joker in the shower with you. That's a pretty ballsy claim, so I decided to give it a shot. No surprises – it handled the shower like a champ, despite getting covered in water, shaving cream, and soap throughout the duration of said shower. So yeah, take it to the beach, pool, shower, or lavatory, it can handle it. 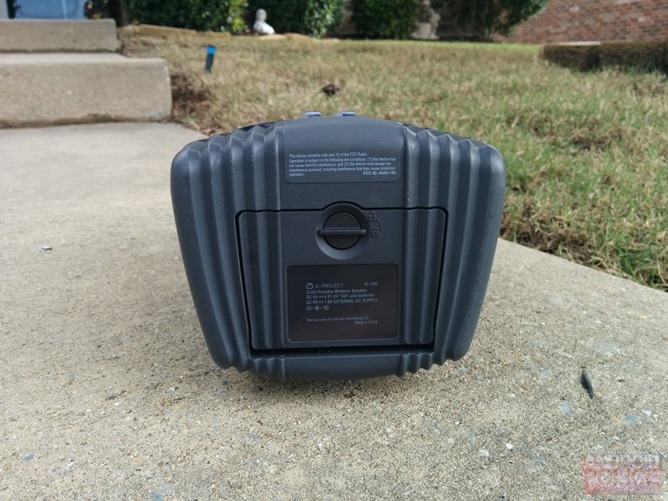 For all its good features, the sound quality of the G-Go isn't really anything to write home about. It uses two small drivers to pump sound, and while they sound decent, the G-Boom absolutely blows it out of the water, and it's only $30 more. That's another reason why the G-Go feels out of place in the G-Project family to me – it's almost like they felt like a mid-sized speaker was needed to fill a gap, but the execution here isn't as good or as polished as all of its siblings. That said, the build is just as solid as you'd expect (all of the speakers are built like tanks), but the lack of a rechargeable battery and relatively small sound for its size make the G-Go a hard sell for me. For $99, the G-Boom is a much better deal (though it's not waterproof); if $70 is your budget, though, the G-Grip may be a better choice. Let's take a look at it now. 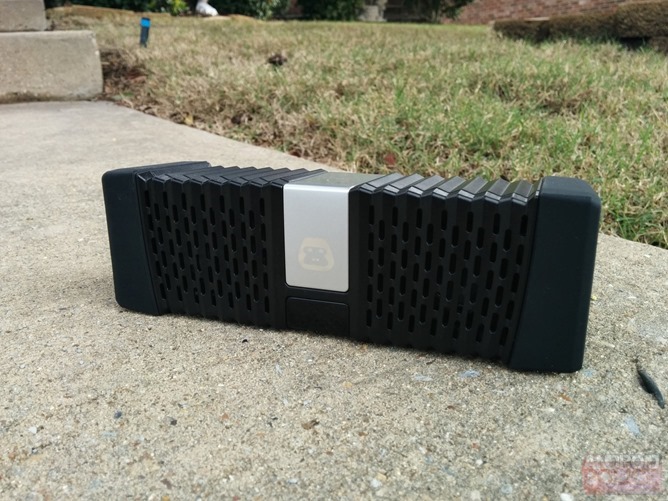 The Grip is G-Project's Jambox-sized speaker. It's small and light enough to be thrown into a bag without taking up too much extra space, but big enough to actually be useful. The sound is pretty astounding for such a compact speaker, especially when its $70 price tag is taken into consideration. The Ultimate Ears BOOM is the only speaker in the same size class that I've heard and consider better than the G-Grip, but it's also more than twice the cost. That's saying something, as the Grip easily trumps not only other speakers in this price range, but also ones that cost substantially more.

Like with other G-Project speakers, though, it's about more than just sound – it's about not having to baby your speaker and doing with it what you want. The Grip is tough as nails and built to withstand a beating. It's not splash/waterproof like the Go, but it's definitely rugged as hell. According to G-Project, it can withstand drops of over eight feet and a crush force of over 1,339 pounds. So, be rough with it. It can handle it. 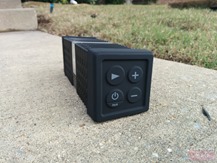 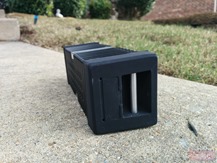 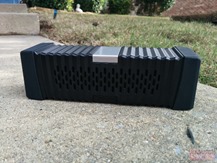 The entire unit has a very industrial look to it (much like all of G-Project's other speakers), with a strong aluminum casing and rubberized caps on either end. The right side houses the microUSB charging port and auxiliary input (found beneath a small silicon door) and an aluminum bar for connecting and included wrist strap, while the controls – play/pause, power, pair, and volume up/down – are on the right side. There are two LEDs on the front that show power and Bluetooth status. It's all pretty cut-and-dry.

Overall, I'd say the Grip has a very balanced sound – not too tinny, but not overly bassy, either. Speaking of the latter, if you use Google Play Music and crank the bass up with the built-in EQ, the speaker will definitely let you know what is too much – it turns your music into a distorted mess. There's definitely a sweet spot in there somewhere though, so you just have to place with it until you like what you hear. The "Surround Sound" option also has a dramatic effect here, so I'd recommend playing with that, too.

Ultimately, for $70, the G-Grip's hard to overlook if you're in the market for a portable speaker. Unlike the G-Go, it's rechargeable (over microUSB, no less), so while it's small and isn't water-resistant, it has its own share of advantages. It's really all about what you want from a speaker. 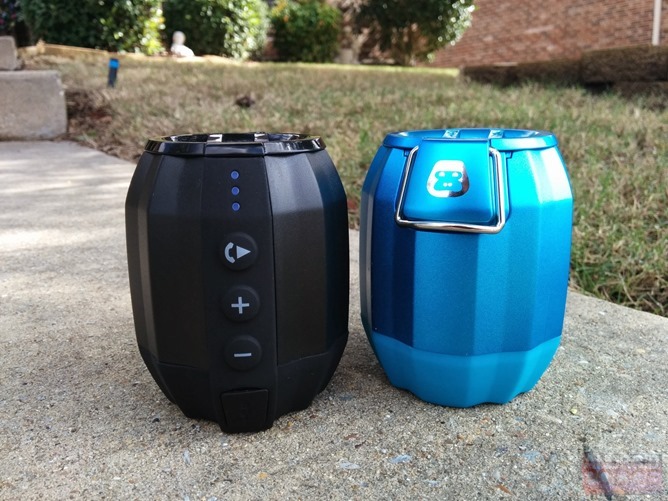 The Pop and Zip are basically the same speaker, save for a couple of details: the Pop is Bluetooth and the Zip features its own in-line 3.5mm audio cable, and the Pop also doubles as a speakerphone. Since they're so similar, I figured it only made sense to throw them both in the same section of the review.

Both speakers feature the same driver as the Go, albeit only one each (instead of two, like in the Go). At $40 and $20 respectively, the Pop and Zip easily offer the best value on the market – it's hard to believe they're this small, sound this good, and cost this little. I've been referring to them as "sound grenades," because that's exactly what they are: small, explosive speakers. And, you know, they actually kind of look like grenades. I can't emphasize enough how powerful the size-to-sound ratio is with these little guys. It's interesting how they compare to the Go – despite only having one driver, the sound quality between the Pop/Zip and Go is almost indistinguishable. 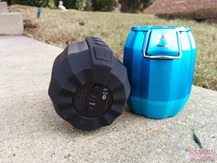 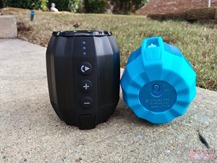 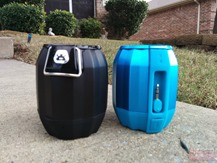 All that said, they don't get very loud (but really, would you expect a speaker of this size to?), and that's really the only downside of these pint-sized monsters. Both are also battery-powered (rechargeable, not replaceable), which I only mention because it could be assumed that the Zip is passive. Fortunately that's not the case.

On the outside, the Pop offers basic Bluetooth features: Play/pause/answer/end call, volume up, and volume down. Since the Zip is inline-only, it obviously can't support these features, so it's a bit more basic. Otherwise, the outside is the same on both – the power button is on the bottom, and there's a hook on the "back" so it can be hooked to backpack or something with a carabineer.

Next to the G-Boom, I'm the most impressed with the Pop and Zip, as it's just amazing that G-Project was able to coax this much sound out of such a small, affordable speaker. If you have a very limited budget, this is definitely the way to go. And the Zip makes a perfect speaker for kids who may not be the most careful with their stuff. At $20, it fits well in the stocking-stuffer category and is built to take a beating. 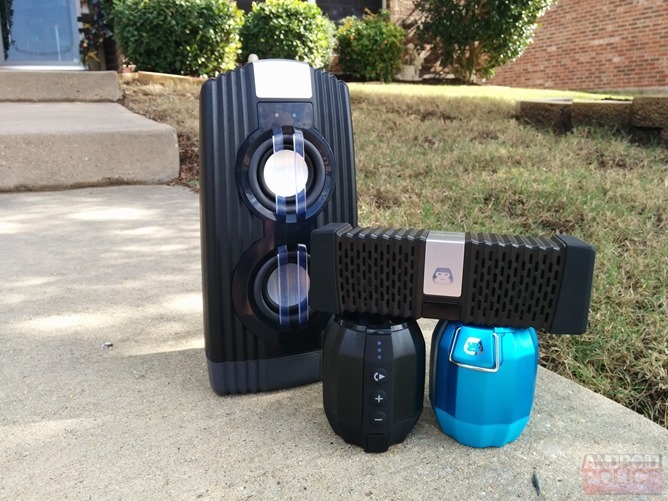 Within the G-Project speaker family, there's likely something for everyone, whether you want big or small. And they're all affordable – whether you have $20 or $100, you can not only get a speaker, but a good one. The quality in construction is unprecedented for the cost, and the audio quality is also second to none in each speaker's price class. The one exception is the G-Go, which I find to be out of place next to the other speakers. That said, it's the only one of the bunch that's waterproof, which could prove to be valuable for some. But the fact that it's powered by AA batteries (or the AC adapter) makes it immediately less appealing to me, unless you just like the idea of supporting the battery industry.

Aside from that annoyance, you really can't go wrong with any of G-Project's offerings. I'm not going to say it's impossible, but I can't feasibly see how you can beat the value offered here. G-Project simply puts out the most bang-for-your-buck speakers I've ever personally used.

Here Are The Details Of Recently Discovered Vulnerabilities That Allowed Any App To Gain Root ...