Back on Halloween, Google promised that proprietary binaries and factory images for the Nexus 4, Nexus 7, and Nexus 10 would arrive shortly after devices received their OTA updates. Even though some OTAs haven't even rolled out yet, as of a few minutes ago, all modern Nexus devices now have Android 4.4 KRT16O factory images and drivers available for download. 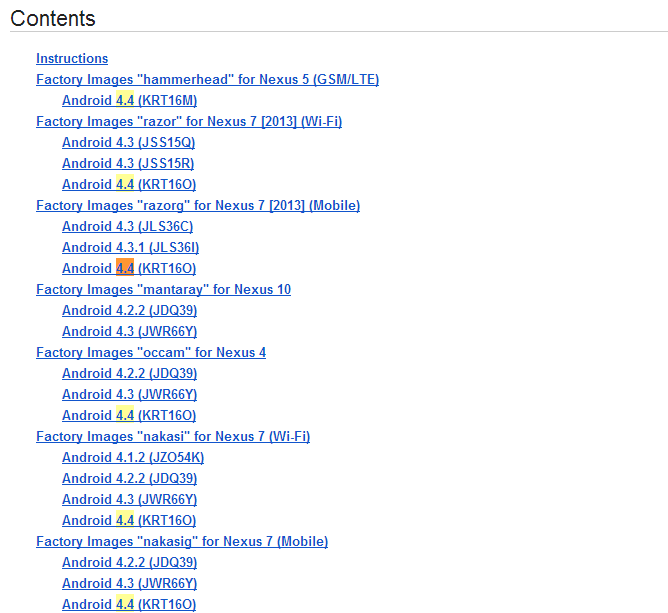 This means you can flash stock Android 4.4 onto any supported device, even if an OTA either wasn't available yet or wouldn't work for some reason. The availability of binaries/drivers, on the other hand, is great news for custom ROMs.

Note #1: If your bootloader is locked, your data will be wiped for security reasons - there's no way around that. You will want to back up what you want manually.

Note #2: If your bootloader is already unlocked, you have the option of skipping the data wipe during the factory image flashing procedure. In some situations, not wiping user data may prevent the device from booting, in which case you'd probably need to go ahead with the wipe, but for simple OS upgrades from one version of stock Android to another one higher, wiping data should not be necessary.

In order to complete the steps below, you need to have the Android SDK installed. The SDK contains the latest version of adb and fastboot, which you will need for flashing files and issuing commands. You will also need a MicroUSB cable to execute adb sideload, fastboot flash, and other commands. You also need to unlock your bootloader - a process that wipes your data.

To unlock the bootloader, if you haven't already done so:

Note: The above procedure restored the factory recovery, so if you want a custom one, you can flash one now (see below).

For better security, you can relock the bootloader by issuing fastboot oem lock while booted to the bootloader. This will, however, mean that if you ever want to do anything that requires an unlocked bootloader, you will lose your data in the unlock process.

Rooting your Nexus device is very easy. It requires an unlocked bootloader and a custom recovery. I recommend using TWRP.