Activating a Nexus 5 on T-Mobile is far from a difficult process, but if you missed out on the first wave of Nexus 5s on Google Play, T-Mobile will soon be ready to sell one to you themselves. The company is launching the latest Nexus handset on November 14th online, and they will introduce it in-stores a week later.

Rather than paying $349 for the phone on Google Play, T-Mobile customers can buy it for $41.99 down, followed by 24 monthly payments of $17. Altogether, that adds up to a rather high $449 for the 16GB model, but that's the price you pay for getting to walk out with the phone for the equivalent of a tank of gas. If this sounds exciting, T-Mobile's willing to notify you when the phone goes up for sale. 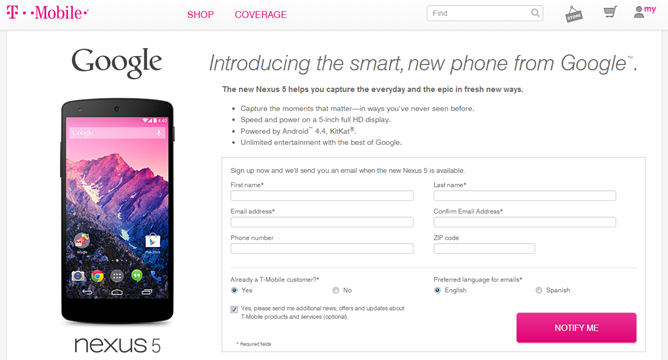 T-Mobile is also now taking pre-orders for the 2013 Nexus 7. The tablet won't ship until November 20th, but you don't have to pay a penny upfront as long as you commit to 24 payments of $16 a month. That adds up to $384, just $35 more than what the Nexus 7 costs on Google Play. Either way, the device will go nicely with T-Mobile's free 200MB of data for tablets plan. 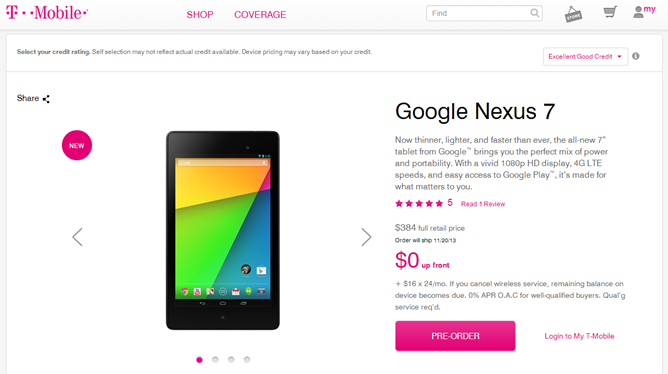 There you have it. Buying a Nexus 7 from T-Mobile kind of makes sense, but picking up a Nexus 5 from the carrier is much less appealing. Unless you're invested in T-Mobile's JUMP plan, you're much better off getting the phone from the Play Store for $100 less.

At the top of most everyone’s holiday wish list this year are cutting-edge consumer electronics, and a shining example – Google Nexus 5 – launches online at www.T-Mobile.com on Nov. 14 and in T-Mobile retail stores and select dealers Nov. 20.

T-Mobile makes it easy and affordable to get the hottest Android smartphone in time for the holidays with an upfront cost of only $41.99 down and 24 equal monthly device payments of $17[1] with T-Mobile’s Simple Choice Plan. T-Mobile offers Nexus 5 customers an unprecedented wireless experience by freeing them from annual service contracts, overage worries, ridiculous upgrade restrictions and complicated plans while on a speedy nationwide 4G LTE network. Consumers can sign up for more information on Nexus 5 at https://explore.t-mobile.com/google-nexus-5.

Powered by the latest and most advanced Android™ 4.4 OS, Nexus 5 is built to deliver a pure Android experience with a stunning, lightweight design, powerful 2.26GHz quad-core processor and LTE capabilities to keep people connected and multitasking while on the go. The vibrant 5-inch full HD display and advanced 8MP camera with Optical Image Stabilization deliver crisp and more true-to-life colors for all mobile entertainment, gaming, photo and video activities. For more information, please visit http://multimediacapsule.thomsonone.com/t-mobileusa/google-nexus-5.

In addition, Google’s flagship 7-inch LTE tablet – Google Nexus 7 – is now available for pre-order for $0 down.

[1] If you cancel wireless service, remaining balance on phone becomes due. 0% APR O.A.C. for well-qualified buyers. Blizzard's Hearthstone: Heroes Of Warcraft Trading Card Game Is Coming To Android In 2014