Remember when people used to tape point-and-shoot cameras to their Nokia candybar phones and jokingly call it a "camera phone?" If you'd like to see the modern incarnation of that bad joke, you can but it on AT&T starting today. The Galaxy S4 Zoom, a mid-range smartphone with an admittedly decent point-and-shoot camera strapped to the back, is now available for purchase. 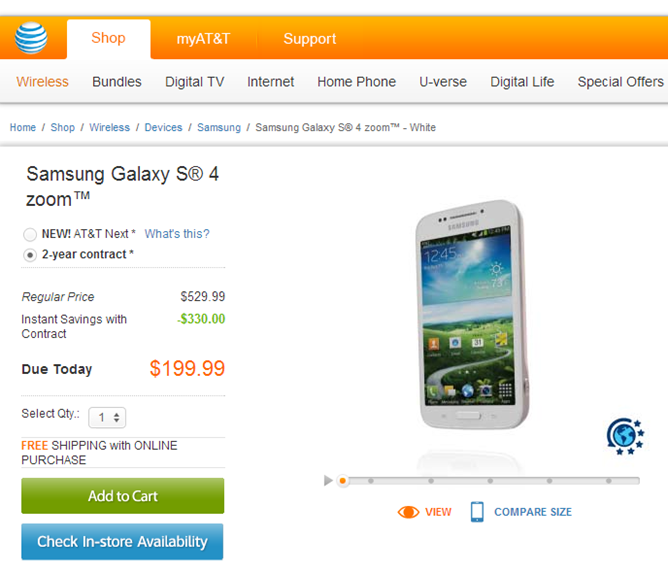 You can pick one up for $199.99 on-contract, or $529.99 if you want it free and clear. The big selling point is the 16MP camera with a 10x optical zoom, complete with optical image stabilization, an F-stop range of 3.1-6.2, 3200ISO, a real xenon flash, and a physical shutter button. Naturally the phone has a ton of camera-specific software on top of Samsung's heavy Android 4.2 build, including 25 "photo modes" for on-the-fly environmental adjustments.

The actual specifications of the phone are roughly in line with the Galaxy S4 Mini: a 4.3-inch, qHD AMOLED screen, 1.5Ghz dual-core processor, 1.5GB of RAM, 16GB of storage, and an open MicroSD card slot (which you'll certainly need for all those photos). The battery is impressive for the size at 2330mAh, but you'll run it down quickly if you use the camera function frequently. Naturally the phone is a bit on the chunky side at 125.5 x 63.5 x 15.4mm, with much of that being taken up by the grip and lens.

US Cellular's Galaxy S4 Android 4.3 Update Gets Detailed By Samsung, Is Scheduled To Roll Out Today

Chipotle's Mobile Ordering App For Android Is Now Available In All Locations, Lets You Pick Up ...