The Moto X got a price drop on all American carriers late last month, bringing the on-contract price down to $100 for all American carriers (though you can find it cheaper at some retailers). It looks like Motorola is following suit with the unlockable developer versions of the phone, which are sold directly from the manufacturer and without subsidy. Previously the Developer Editions were $649.99, but you can now pick one up for $549.99. 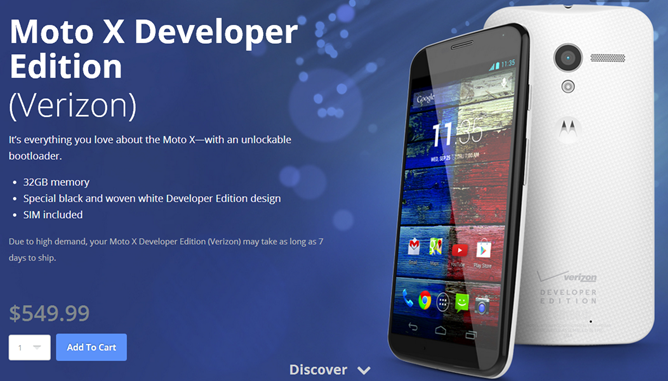 The discount has been applied to both the GSM-LTE model (basically an unbranded AT&T phone - the T-Mobile model doesn't need a developer edition) and the Verizon phone. Verizon and AT&T are the only American carriers that have opted to lock the bootloader on Motorola's new flagship, much to the consternation of Android purists who appreciate the phone's relatively light 4.2 software load. The DROID MAXX Developer Edition, which is only available for Verizon, is still $649.99.

Aside from the 32GB storage option (which isn't available from Verizon) the user-unlockable bootloader is the only difference between the carrier models and the Moto X phone sold on Motorola's website. They still use Motorola's custom launcher, Active Notifications, and Touchless Control features, and the Verizon model has quite a few carrier-specific apps thrown in. AT&T customers might find the Moto X Developer Edition a hard sell against the new Nexus 5, available with Android 4.4, an unlockable bootloader, better specs all around, and an off-contract price that's still $150 cheaper for the 32GB version. Verizon customers.... well, you'll just have to take what you can get, I suppose.

Google Keyboard 2.0 Hits The Play Store, Brings Over Most Of The New Features Found On The Nexus 5