About a month ago, Dropcam released Dropcam Pro ($199), an upgraded version of its previous camera, the Dropcam HD ($150). This new version boasts quite a few improvements over the HD version (which is now simply known as "Dropcam" and nothing more), like a wider field of view, increased zoom, improved low light vision (night vision), and better audio quality. So, basically everything. Well, everything that matters anyway. The real question is "how useful is it?" – it's not only useful, but versatile. It's small and light enough to put basically anywhere, and it's easy to move it around the house if need be. Let's take a closer look at what Dropcam Pro offers, not just compared to the original Dropcam, but also generally speaking. 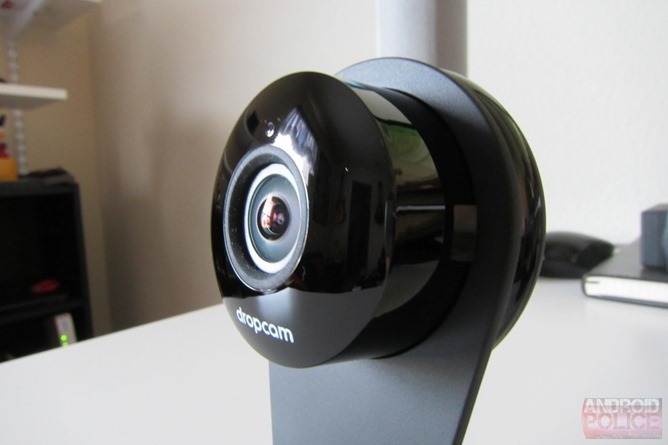 When you're away from home, Dropcam's got your back. When you are home, Dropcam's got your back. Whether you're in the next room or halfway across the country, Dropcam's there to keep an eye on your house, stuff... or whatever else you want it to. It's incredibly easy to set up (took me about three minutes), and as long as your home Wi-Fi doesn't go down, the feed's available to watch on your computer or mobile devices at any time. It works incredibly well for what it is, but don't expect it to be instant – with anything like this there is going to be some sort of latency.

In my testing I found the delay to be between 3-5 seconds on average, but for whatever reason there were periods where it was upwards of 10-15 seconds (this is probably my home internet provider's fault. Thanks AT&T). In most cases this shouldn't matter, so I only mention it because Dropcam Pro makes a good baby monitor when you need that sort of thing. For example, we had a garage sale a few weeks ago (note: this sucks, don't ever do it), and since these sorts of things start early, my 20-month-old son was still sleeping. I set up the Dropcam in the room so we could see when he started to wake up. The slight latency made this a bit problematic, as we were outside and he was on the other side of the house – by the time we saw him move, there's a chance he could've already been close to rolling off the bed before we could get to him. This resulted in frantic runs across the house as soon as movement was detected. Still, without the Dropcam, we wouldn't have known he was even moving in the first place. Considering this isn't really what the Dropcam Pro was made for, I still I think it worked out pretty well.

The Dropcam Pro and HD are meant for indoor use only. 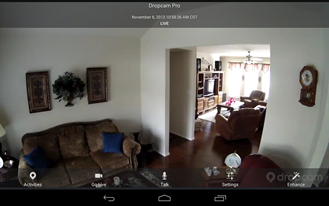 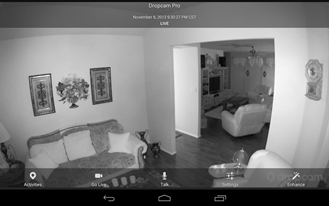 Left: normal lighting during the day; Right: Very dark at night (there were no lights on in this image)

The image quality produced by Dropcam Pro is pretty damn stellar. It looks great during the day regardless of lighting, and the low-light output is also excellent. It keeps things sharp and crisp, which makes it easy to make out most details if a problem were to arise.

With Dropcam Pro, you can zoom in up to 8x, but things do get pretty pixelated at higher levels. The neat thing, however, is that you can zoom in and tell it to "enhance" the image – it will then set the Dropcam to focus on that one particular area and stabilize the image to produce a much better picture. It's till somewhat blocky, but is still far superior to the zoomed-only image.

Another neat feature of the Dropcam Pro is the two-way microphone. This not only allows you to hear what's going on, but also respond back. So, you can alert would-be robbers that the police are on their way should someone break into your place. Take that, wrong-doers!

The audio quality from the camera end is surprisingly loud and clear, making two-way communication a very usable feature of this camera. Like with most other features, however, this can be disabled on the fly if you choose. Speaking of settings, let's take a quick look at what you'll find under the hood of the app before moving on to the cloud recording feature of Dropcam Pro. 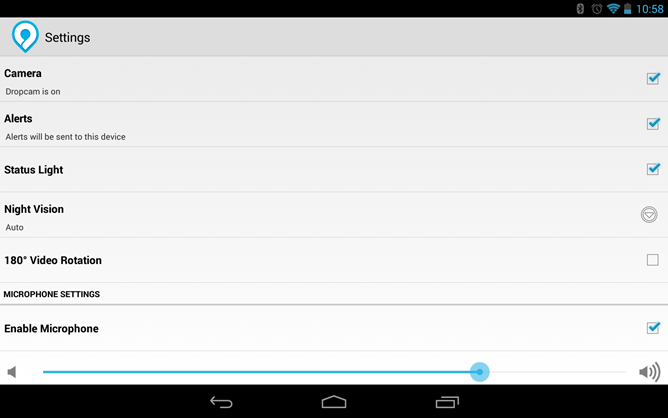 The Settings menus is simple and to the point, just like a settings menu should be. You'll find options to enable/disable the camera, toggle alert notifications (only applies to that particular device), turn the status light on or off, rotate the video feed (in case you have to mount the camera upside down), toggle the mic/set the volume, and set your current time zone. All pretty cut and dry, but I don't feel like it's really lacking anything.

Keeping track of what's the haps, even if it's in the past 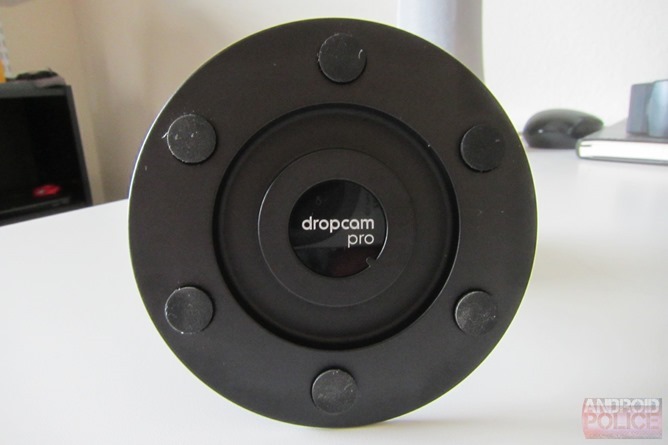 One of the potentially most useful features of the Dropcam Pro (and HD, for that matter) is Cloud Recording. Basically, this will allow the cam to not only monitor what's going on, but store the video in the cloud in case you need to reference back to it for any reason – be it for security purposes or just to catch another glimpse of the kids actually getting along. Speaking of those sweet moments, you can also share clips with your family and friends, or just save a local copy to your computer.

Of course, this feature isn't a freebie – if you want non-stop recording, it's going to cost you. Fortunately, you can choose your own timeframe:

I could easily justify $10 to make sure I have a record of everything that happens when I go out of town – that kind of peace of mind is hard to put a price on, after all. If someone were to break into my house, I'd have a record of it, even if they took the Dropcam. That's a good feeling. Every Dropcam comes with a two-week free trial of CVR, so if you're on the fence about its value this is a good way to dip your toes in the water, so to speak.

Naturally, if you don't choose to purchase a CVR package, you can view the Dropcam's live feed at any time without charge. 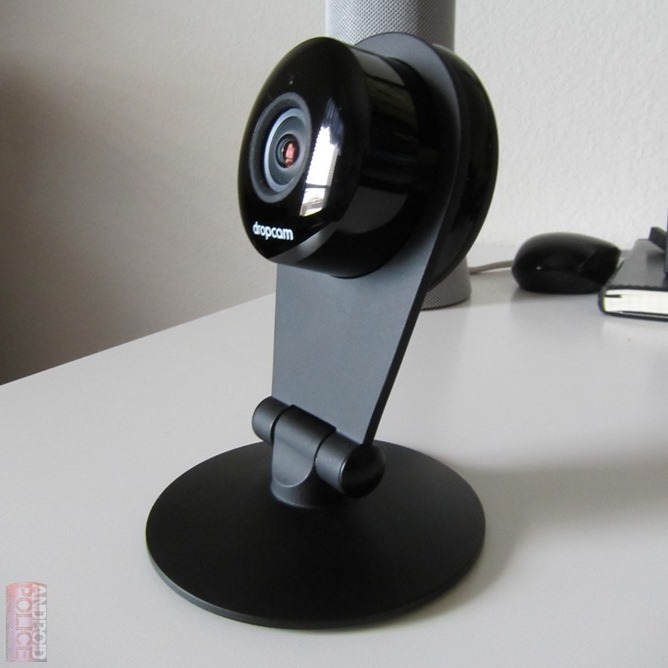 The Dropcam Pro is a useful, versatile (within its own realm of usage, of course), and handy device. It offers peace of mind where and when you need it most, whether than means protecting your assets or just making sure the kids get home from school OK. The option for always-on recording could be a godsend for those who face a tragedy – like a burglary or fire – and the output is good enough that I think it could easily help police identify a potential suspect should be need arise. I realize that security isn't the only use for the Dropcam Pro (or HD), but I'm sure it's at the forefront of most users' minds when considering a product of this nature.

I think the question to be answered here isn't necessarily "should I buy a Dropcam?," because if you're even considering the purchase, there's likely a reason why. The better question is "should I buy the Dropcam Pro over the HD? Is it really worth an extra $50?" to which I answer yes. The wider viewing angle lets you see more of what's going on, the increased zoom could be clutch in certain situations, and – above all – the improved night vision is the difference between getting a clear shot of what's happening in your house and getting a fuzzy idea of what's going on.

At $200, the Dropcam Pro is on the pricier side of the spectrum, but I'm absolutely convinced that you get what you pay for here.

Samsung Tacks On Audible, SiriusXM, And Zinio Perks To Galaxy Tab 3, Note 8, And Several Other ...