It's fair to say that Android went through some chaotic years in the beginning. The pace of development was frantic as the operating system grew at an unprecedented rate. An as-yet undetermined future led to decisions that were made to conform to existing hardware and architectures, the available development tools, and the basic need to ship working code on tight deadlines. Now that the OS has matured, the Android team has been giving more attention to some of the components that haven't aged quite as well. One of the oldest pieces of the Android puzzle is the Dalvik runtime, the software responsible for making most of your apps run. That's why Google's developers have been working for over 2 years on ART, a replacement for Dalvik that promises faster and more efficient execution, better battery life, and a more fluid experience.

ART, which stands for Android Runtime, handles app execution in a fundamentally different way from Dalvik. The current runtime relies on a Just-In-Time (JIT) compiler to interpret bytecode, a generic version of the original application code. In a manner of speaking, apps are only partially compiled by developers, then the resulting code must go through an interpreter on a user's device each and every time it is run. The process involves a lot of overhead and isn't particularly efficient, but the mechanism makes it easy for apps to run on a variety of hardware and architectures. ART is set to change this process by pre-compiling that bytecode into machine language when apps are first installed, turning them into truly native apps. This process is called Ahead-Of-Time (AOT) compilation. By removing the need to spin up a new virtual machine or run interpreted code, startup times can be cut down immensely and ongoing execution will become faster, as well. 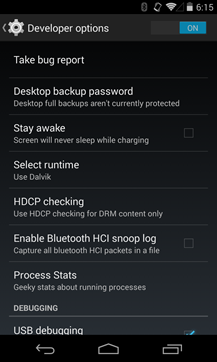 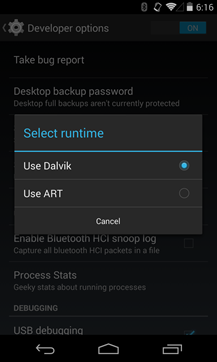 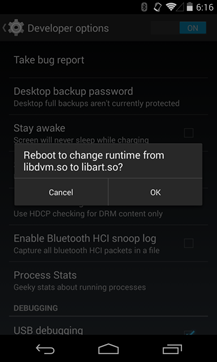 At present, Google is treating ART as an experimental preview, something for developers and hardware partners to try out. Google's own introduction of ART clearly warns that changing the default runtime can risk breaking apps and causing system instability. ART may not be completely ready for prime time, but the Android team obviously feels like it should see the light of day. If you're interested in trying out ART for yourself, go to Settings -> Developer options -> Select runtime. Activating it requires a restart to switch from libdvm.so to libart.so, but be prepared to wait about 10 minutes on the first boot-up while your installed apps are prepared for the new runtime. Warning: Do not try this with the Paranoid Android (or other AOSP) build right now. There is an incompatibility with the current gapps package that causes rapid crashing, making the interface unusable.

How Much Better Is It?

For now, the potential gains in efficiency are difficult to gauge based on the version of ART currently shipping with KitKat, so it isn't representative of what will be possible once it has been extensively optimized. Thus far, estimates and some benchmarks suggest that the new runtime is already capable of cutting execution time in half for most applications. This means that long-running, processor-intensive tasks will be able to finish faster, allowing the system to idle more often and for longer. Regular applications will also benefit from smoother animations and more instantaneous responses to touch and other sensor data. Additionally, now that the typical device contains a quad-core (or greater) processor, many situations will call for activating fewer cores, and it may be possible to make even better use of the lower-powered cores in ARM's big.LITTLE architecture. How much this improves battery life and performance will vary quite a bit based on usage scenarios and hardware, but the results could be substantial.

What Are The Compromises?

There are a couple of drawbacks to using AOT compilation, but they are negligible compared to the advantages. To begin with, fully compiled machine code will usually consume more storage space than that of bytecode. This is because each symbol in bytecode is representative of several instructions in machine code. Of course, the increase in size isn't going to be particularly significant, not usually more than 10%-20% larger. That might sound like a lot when APKs can get pretty large, but the executable code only makes up a fraction of the size in most apps. For example, the latest Google+ APK with the new video editing features is 28.3 MB, but the code is only 6.9 MB. The other likely notable drawback will come in the form of a longer install time for apps - the side effect of performing the AOT compilation. How much longer? Well, it depends on the app; small utilities probably won't even be noticed, but the more complex apps like Facebook and Google+ are going to keep you waiting. A few apps at a time probably won't bother you, but converting more than 100 apps when you first switch to ART is a serious test of patience. This isn't entirely bad, as it allows the AOT compiler to work a little harder to find even more optimizations than the JIT compiler ever had the opportunity to look for. All in all, these are sacrifices I'm perfectly happy to make if it will bring an otherwise more fluid experience and increased battery life.

Overall, ART sounds like a pretty amazing project, one that I hope to see as a regular part of Android sooner rather than later. The improvements are likely to be pretty amazing while the drawbacks should be virtually undetectable. There is a lot more than I could cover in just this post alone, including details on how it works, benchmarks, and a lot more. I'll be diving quite a bit deeper into ART over the next few days, so keep an eye out!

Special thanks to Bart Tiemersma for his contributions!

Teknision, Maker Of Chameleon Launcher Has Been Acquired By A Company You've Probably Never Heard Of