Update: DROID Mini owners are also eligible for the 50GB Google Drive promotion. The smaller device is receiving an OTA update that largely resembles that of the other two Verizon-exclusive Motorola handsets.

It may be exciting to receive a new OTA update, but many don't quite live up to the thrill of seeing the notification appear in our status bars. This is one of those updates. No, it doesn't miraculously roll out KitKat to the DROID Ultra and the DROID Maxx ahead of everyone else, but it does provide users with a preloaded promotion offering 50GB of Google Drive storage. Unless you're a Chromebook Pixel owner with more cloud storage than you know what to do with, there is much to like about 50GB of free space. 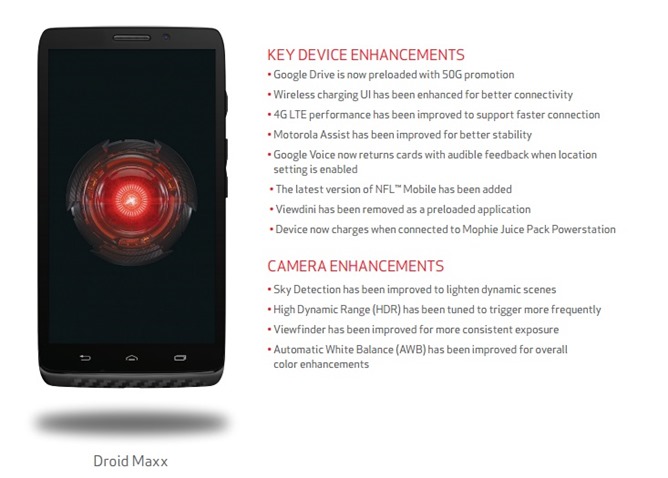 The remainder of the update contains plenty of niceties, such as general bug fixes and camera device enhancements. Anyone who owns a Mophie Juice Pack Powerstation will be happy know that it will actually recharge their device now. The wireless charging UI has been enhanced, and 4G LTE performance has been improved.

The OTA could appear any day now, so look for the notification to pop up at any moment. And for anyone who needs to know, both devices remain rootable with RockMyMoto following the update.

Verizon Announces The Ellipsis 7, Its Own 7-Inch Tablet Set To Go On Sale November 7th For $249

[New App] Activision Releases Call Of Duty: Ghosts Companion App On Day One, But It's Suffering ...