Anyone could sell someone else's tablet. The Nexus 7s and the Galaxy Tabs of the world may not have the brand recognition of the iPad, but consumers recognize them enough to know they want them, and it doesn't take much effort for a carrier to take an LTE version and push it to consumers. But this isn't enough for Verizon, as it has decided to sell a small tablet bearing its name and its name only. Meet the Ellipsis 7. 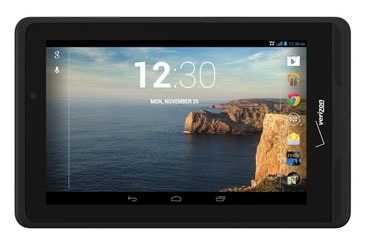 Thanks to @evleaks, the Ellipsis 7 already looks pretty familiar. The specs are largely unknown, but at 7-inches, the tablet is looking to compete with the likes of the Nexus 7 and the Kindle Fire HDX. It comes with the Play Store preinstalled, so customers won't have to settle for a lackluster selection of apps, and a front-facing camera is present for video chatting. Verizon's going to sell the device for $249 off-contract, which makes it significantly cheaper than the LTE version of the Nexus 7. Look for the tablet starting November 7th.

And now Verizon can make its logo as large as it likes.

[Hands-On] Android 4.4 Screenrecord Gets The Job Done, But It's Not Pretty