The first batch of Nexus 5 phones reached many early customers yesterday, but many of those taking advantage of the phone's compatibility with the Sprint network are having serious issues getting the device connected. According to several tips, this XDA thread, and this Google Groups thread, incompatible IMEI/MEID numbers on the phones are causing the activation process to fail, and giving major headaches all around.

Update: Sprint reached out to us with word that this is no longer an issue. Here's the company's official statement:

Sprint supports activations of the 32GB version of the Google Nexus 5 being sold from the Google Playstore.  There was an issue that affected the activation process for a  small number of these devices.  Our team’s identified and resolved the issue overnight.

So there you go – both versions of the Nexus 5 should work without an issue on Sprint now.

The core of the problem seems to be Sprint's authentication system. Like other CDMA/LTE providers, phones on Sprint's network must fall within a verifiable range of MEID identifying numbers. If they aren't verifiable, the device is rejected. The Nexus 5 is brand new, and according to some users, isn't yet in Sprint's system (the phone officially launches in Sprint stores on Friday, November 8th). Further complicating the problem is the fact that Sprint normally doesn't offer SIM cards without a device - all new phones are sold with a specific card, and until now the company has only issued extra SIM cards in cases of international roaming. Even some Sprint retail stores don't seem to carry individual SIMs. Customers who call Sprint customer service (1-888-211-4727) can get a SIM card mailed to them, or pick one up from a Sprint Corporate Store, but that might not be much help. 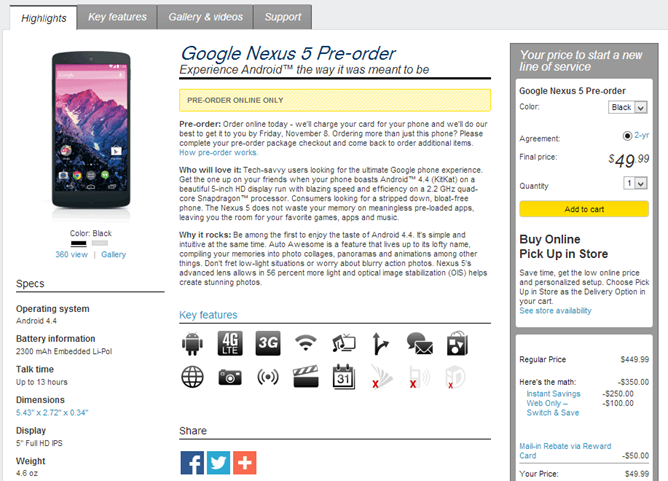 The 32GB model of the Nexus 5 in particular seems to be giving people trouble. While a few customers have reported getting the 16GB N5 to work with either a phone call verification or a swapped-out SIM card, the 32GB version is stumping Sprint representatives both on the phone and in retail stores. Some are guessing that the issue stems from the fact that Sprint won't be offering the 32GB model from its own stores, and thus hasn't entered a range of MEID numbers for the larger capacity. Something similar happened with Verizon customers who tried to activate the Nexus 7 2013 on new lines.

A Sprint representative in this official support thread is offering some clarification:

...The Nexus 5 requires a SIM/UICC card in order for us to activate it. The device is being sold through Google Play, but it does not include the card. Without this card, the device will not function correctly. In order to obtain a SIM/UICC card for the device, you can go into a Sprint Corporate Store and they can sell one to you at NO CHARGE. This way the device can be successfully activated.

...At this time, we are only supporting the 16GB Nexus 5. The system is/will not recognize the serial number for any device outside of that. I deeply do apologize for the inconvenience this has caused.www.sprint.com/newsroon is a great place to stay on top of updates, should there be any.

Another representative in the thread gave contradictory information:

The Google Nexus 5 Play Store version will only have a IMEI code on it for activation. When activating online, leave off the last digit. If you receive an error message while trying to activate and have a UICC card, please send me a private message with your IMEI and PTN. Thanks for your patience

At least some of these issues should clear up on Friday, when Sprint is scheduled to start formally selling the Nexus 5 through its online and retail channels. Some customers are having success by simply swapping in a compatible SIM card from another Sprint LTE phone. If you've had trouble activating your Nexus 5 on Sprint, or even if you haven't, fill us in on your experience in the comment section.

Source: XDA, Google Groups - thanks to everyone who sent this in!