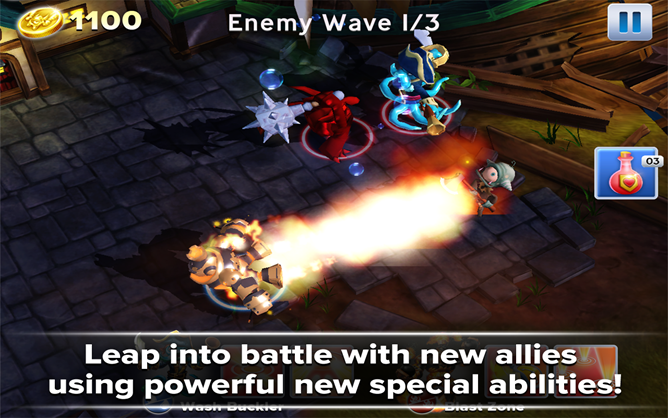 The game allows you to gradually unlock the Skylanders heroes, or if you've got the titular toys, warp them directly onto the field of battle. The fight system allows the player to control up to two Skylanders at a time, beating down adorably menacing bad guys and upgrading their stats and abilities as you progress. There's a story in there somewhere, but it isn't likely to make adults do anything but roll their eyes. The fights at least have a bit of strategy, with a hybrid of turn-based and real-time battle that relies on good troop placement and timing to win.

Now for the less palatable part of the game: Skylanders Battlegrounds costs seven bucks. That's a lot for a title that one, doesn't seem to be all that groundbreaking in any department, two, relies on the purchase of real-world toys to unlock its full potential, and three, also includes in-app purchases for currency and upgrades. Parents, if you want to send those youngsters to college some day, you might want to pretend that this whole Skylanders thing (and the very similar Disney Infinity) doesn't exist this holiday season.

Google Does Caller ID: KitKat 4.4 Matches Numbers Against Google Places, And Starting In 2014, ...