It simply wouldn't be a new month without a new roundup of the top apps and games from the previous month. We've already gone over last month's very best apps - so what about games? There were plenty of new games to choose from last month, but a few really stood apart. We've compiled a short list once again of the very best games sure to enhance any Android user's catalog. Without further ado, let's get started.

Type:Rider is an awesome game. I could stop this segment right there, but there's more to be said. Type:Rider is an immersive, ethereal physics platformer in which you play the two dots of a colon, scooting across iconic letterforms from equally iconic typefaces throughout history. You'll need to solve the game's riddles by collecting nuggets of wisdom about the history of typography and some of its most important figures and milestones.

The game is one of the most well-executed and thoughtful creations I've seen this year, and provides great bite-sized lessons in typographic history that will make you want to collect every possible fact.

The game is three dollars and change, and absolutely, undoubtedly worth it for anyone who loves chill-out games, flooring visuals, or typography. Clash of Clans, a top-down multiplayer strategy battle game, "stormed" Android last month, bringing the stylized chunky visual appeal existing fans of the game had already grown to love to those running Android. The premise is simple - build your clan and build your village, then turn your village into an impenetrable fortress and defend it against invaders as you climb up the ranks to become the strongest clan out there.

The game is free-to-play, and carries some IAPs (which can be disabled). Still, it's a very entertaining way to waste some time, and worth checking out.

October was a good month for zombie-centric sequels. Besides Dead Trigger's follow-up, we got Plants vs Zombies 2. This time, you'll defend yards throughout time and space against zombies. The whole game is based around the incredible flimsy pretense of your whacky neighbor losing track of a taco, and traveling through time to find it, but the gameplay is so carefree and easy to pick up that that can be ignored.

If you were a fan of the original, or just want some nearly mindless pick-up-and-play action, you'll like PvZ2.

Star Command is a game that boasts "no in app purchase roadblocks," a pixel-centric art style, and the ability to build your dream space ship. In the game, you're tasked with managing an ever-growing starship, while dealing with "strange and annoying" alien civilizations in the unknown depths of space. Your ship can focus on specific strengths like tactics, science, or engineering, but you'll still need to defend from invading aliens. 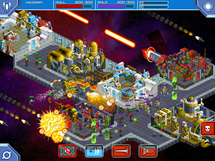 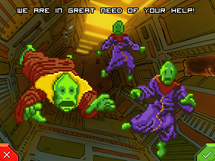 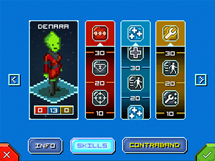 The game is $2.99, but definitely worth it considering its refusal to rely on IAPs. Hit the widget below and start building your ship. Fist of Awesome, a game from I Fight Bears, is - as you might guess from the title - centered around an awesome fist. That fist belongs to Tim Burr, a man whose family disappeared after his house spontaneously burst into flames. As if that weren't bad enough, Tim soon finds that the world is now controlled by bears. Yes, bears.

Of course, the next logical plot point is that Tim's fist takes on a mind of its own, and begins a quest through space and time to defeat the bears and restore order to the world.

With charming pixel-based visuals and gameplay that's easy to pick up and play for a few minutes at a time, Fist of Awesome is largely a winner.

The developers describe Fist of Awesome as a "heartfelt love-letter to golden classics like Double Dragon, Streets of Rage, and Final Fight," and indeed, thumbprints of the classics can be felt here.

If you want a classic-inspired brawler that's as fun to look at as it is to play, you'll need only to plop down $3.99 in the Play Store. Any of the above games would make great additions to your library, but if none of them suit your tastes, don't worry! We'll be back soon with one of our larger semi-weekly roundups with plenty more options to bring back the vitality of your mobile gaming collection.