As we're still basking in the afterglow of a big Android announcement, Google is back to the same old stuff. The developer dashboard has been updated with the freshest Android distribution numbers. This time Jelly Bean has hit a milestone just as it became the "old" version of Android.

According to Google's newest values, Jelly Bean is now on more than half of all Android devices – 52.1%. Keep in mind that includes all Jelly Bean versions from 4.1-4.3. That number is up from 48.6% last month. The increase comes at the expense of all the past versions, which have ticked downward a few points. ICS is now under 20%, but Gingerbread is still hanging in there with 26.3%. Oh, Gingerbread... it's all those low-end devices that can't run newer versions of Android – something that KitKat is supposed to solve. 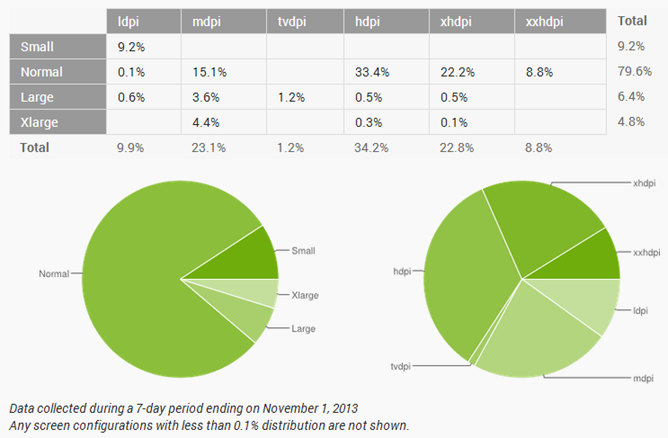 The screen size and density situation has hardly changed at all this month, but it's always pretty stable. The Normal screen size is still most common with almost 80% of the market. Then hdpi and xhdpi are the main densities at 34.2% and 22.8%, respectively.

All the above numbers are based on devices that have checked into the Play Store during the last week, which gives a good estimate of active devices. It will be interesting to see how KitKat wedges itself in there as Nexus devices migrate over in the next few weeks.