Advertising revenue is a huge part of doing business in the mobile apps space for a large number of developers. As such, from that practice have emerged methods to send advertisers information about you to better serve appropriate ads. Oftentimes, the way your advertising "profile" is specifically identified is less than ideal from a security standpoint. Many apps use your phone's IMEI - a potentially personally-identifying number - as your advertising identification number because every modern smartphone has one.

Another common practice that has emerged in mobile advertising is a lack of opt-out capabilities for such systems. This means users are often left with the choice of either accepting that some form of hopefully non-identifying personal information is being transmitted to an advertiser, or simply choosing not to use a particular app. 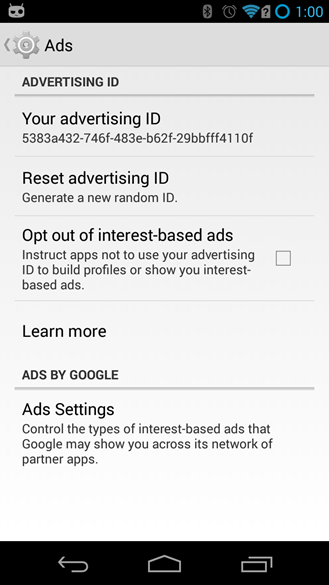 Google wants to fix these problems, and as such, yesterday it announced the Advertising ID, part of the new Google Play Services 4.0. The advertising ID is a standard UUID code (Apple uses them in iOS) - a unique, software generated identifier - that will be associated with your Android device and Google account (presumably, one UUID per device on your account). In order to gain access to your advertising ID, apps will need to interface with Google Play Services, which will then initiate a check against your Google account to see if you have personalized ads disabled. If you do, the app will not be granted access to your ID, and no personalized ad information can then be associated with it.

Google also allows you to reset this identifier at any time in the Google Settings app, at which point a new UUID is generated. Apps are forbidden from linking the info from your old ID to the new one. Apps are also not allowed to tie your advertising ID to any persistent device identifier (IMEI, ESN, SSAID, MAC address, etc.) to skirt around the requirements for honoring resets and opt-outs. Google expects all developers to comply with this new policy by August 2014, 9 months from now. If they don't, they'll be in violation of the Google Play Developer Content Policy, and their apps subject to removal from the Play Store. Just how vigorous enforcement of the advertising ID will be, though, remains to be seen.

If you want to read more about the advertising ID from a technical perspective, check out this page on Android Developers.