Google is finally paying attention to the phone app in Android 4.4 by adding smart organization of contacts, enhanced search, and a new card-based UI. However, there might be something more dastardly hiding in the dialer code. Google might be preparing to roll out ads of some sort to the Android dialer. 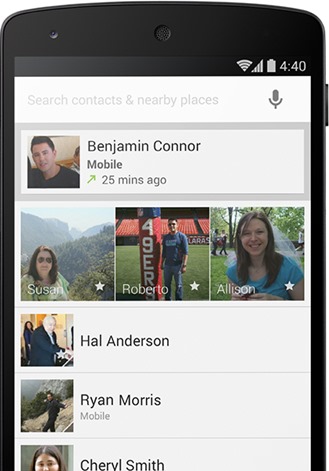 The strings from the dialer APK clearly refer to advertisements, but it's not clear how (or if) they will be implemented.

It might be a simple text ad like we're already used to seeing in Google Maps, but it probably has something to do with the new search box with local business integration. Opening the search could pull up a relevant ad within the results, for example.

If this sounds like a nightmare hell ride to you, don't stress. The advertisements_disable string seems to indicate the ads can be turned off. We'll know more once the device starts showing up in larger numbers.

You can also search for nearby places and businesses, your contacts, or people in your Google Apps domain.

That would be a fitting place to insert contextual ads.

Update #2 by Artem: Apparently, the code above has been appearing and disappearing in the Phone/Dialer apps for a number of years now (thanks, Zhuowei, for pointing this out). However, we have found more ad-related code that wasn't present before. This code points to AdMob, which is a Google-owned advertising network specifically aimed at mobile applications. Here is the code:

The same AdMob-related code is now present in Gmail, Google Play Services, Videos, and the new combined Search/Launcher, but not other Android 4.4. apps, which seems to support our updated theory. Of course, not everything found in APK teardowns ends up happening - some things are misinterpreted, some never materialize because of changed plans, and it's important to remember that nothing is 100%.

Update #3 by Artem: A Google representative reached out to clarify that the first code segment is indeed old and has been around, which we've acknowledged above. Google is also not working on bringing ads to the Dialer, according to the rep. Finally, we were promised a response about the second code fragment when it gets clarified by the team responsible for it.