Today, Product Manager Randall Sarafa shared a post on Google+ confirming features discussed in the Google+ event earlier this week along with statuses and moods. Statuses and mood icons are apparently set to appear next to a user's "read up to here" indicator.

Also of note is the fact that Sarafa indicated that Hangouts' update would be version 2.0, not 1.3 as previously expected. Additionally, he clarified that MMS would be present in the update for users running Android 4.0 and above, not just SMS. For Sarafa's full post, head to the bottom of this post. 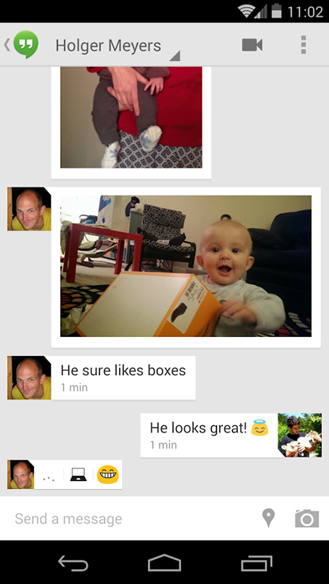 Singhal also notes that the team understands the importance of Voice numbers outside the US and the ability to send/receive MMS messages, something users have been waiting a long time for. He explains that this still needs some level of cooperation from carriers, which "can take some time."

Finally, the post notes that in an effort to make Voice as secure as possible, developers of apps that make "unauthorized" use of Google Voice will be notified that they must stop, transitioning users to a new implementation by May 15, 2014.

Singhal doesn't give a specific timeline for most of these points, but it's encouraging to hear that Google Voice's needs are still being attended to. For the full post, hit the link below.

HTC Says All US Versions Of The One Will Have KitKat in 90 Days, Google Play Edition in Just 15 Days

16GB Black Nexus 5 Sells Out In The US Play Store After Just 33 Minutes [Update: All Versions ...