The next version of Android is bringing a lot of visual options to the table, and they're not just for Google to play with. Buried deep within the KitKat 4.4 API (level 19) is the ability for apps to request translucent system UI overlays, specifically on the top notification bar and the bottom navigation bar (if your device has one). You can see this feature in action in all the promotional photos of the Nexus 5's homescreen, where the wallpaper is visible form the top of the screen to the bottom. 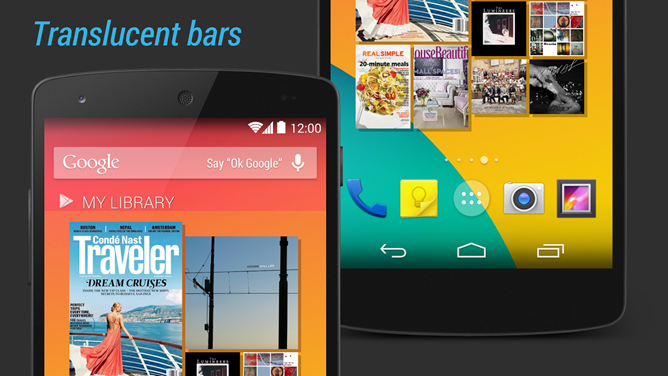 There have been a few OEMs that have tried this sort of thing with their own software skins, notably Samsung (various 4.2 devices), LG (on the new G2), and Motorola (on the DROID RAZR HD and its siblings). Now the capability should be available to all developers, giving them access to a little eye candy for their interface. It looks like the translucent effect can be applied to a static background image or a solid color, and a subtle gradient will be applied to help distinguish navigation buttons and notification icons. Interestingly, it looks like even Google isn't applying it everywhere - check out the standard black bars on the Nexus 7 next to the translucent ones on the Nexus 5.

Update: There is further evidence that translucent bars aren't enabled on all devices. For example, this commit seems to have disabled it on the Nexus 10 (thanks, TheManii!). 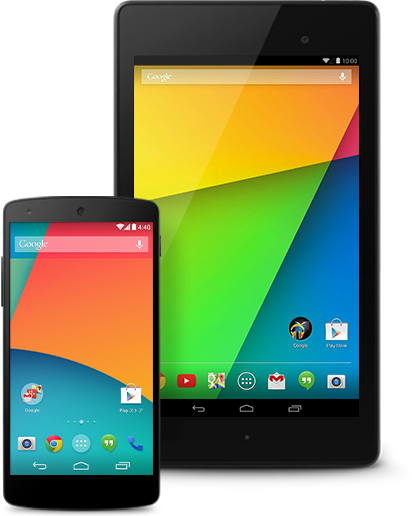 Admittedly this isn't the most useful feature in KitKat, but it is one of the most visual ways that it's distinct from Jelly Bean. I can't wait to see what the custom ROM developers and theme makers do with it.

Want To Know More About Android 4.4? Check Out All These Official Google Info Pages