Android has had native support for user-taken screenshots since 4.0, and a few OEMs like Samsung have had supported the feature even before that. But until now, getting a reliable video recording of your device's screen has been a major pain, usually requiring some kind of root solution that doesn't work for all hardware. In KitKat, Google is doing away with that, allowing end users to record video directly from the screens of their devices.

4.4 includes a screen recorder utility available for all users, something that most desktop operating systems are still lacking. Video can be recorded at any resolution (landscape or portrait) supported by your smartphone or tablet and saved in an MP4 file with the screen recording utility. Users can initiate screen recording with the command adb shell screenrecord or by using DDMS. Check the video below at the 5:10 mark for a very short developer overview. 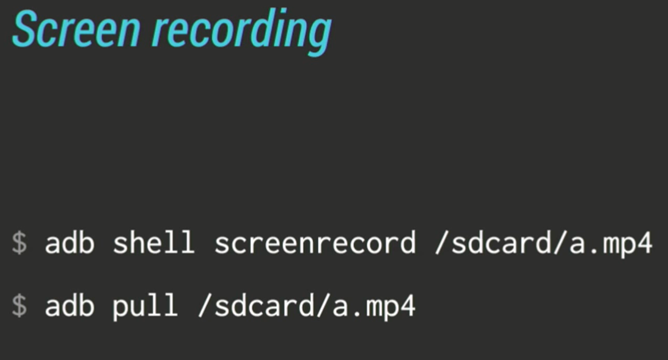 Update by Artem: The documentation is quite ambiguous, so right now it's not clear whether you can initiate screen recording from the device without having to be connected to a computer. Google talks about an on-device screen recording utility and only in the end follows up with the mention of ADB and DDMS. The part that's unclear is whether those tools are the only methods to initiate recording or just some. The article also previously suggested there was a new API offered for other apps to utilize. The erroneous reference has since been removed.

Oh, and before you start dreaming of an Android-powered pirate empire, Google thought of that already. Apps with copyright-sensitive content can be secured against the feature with a simple code flag: SurfaceView.setSecure(). It's not clear at the moment whether that will mean that the content area is blacked out or the recording app will just refuse to work, but there will be no easy copyright infringement on Google's watch... until someone inevitably finds a way around it.

On a personal note, I'd like to thank Google for making the lives of app reviewers just a little more easy (you can definitely look forward to more video reviews around here), and for actively working against the lackluster app demonstration videos that litter the Play Store. Cheers.