After announcing KitKat and the Nexus 5 earlier today, and releasing the Android 4.4 SDK, tools, and other related goodies, Google has moved on to the next important step - source code. As announced on the Android Building forum, Android 4.4 is now trickling in, bit by bit, into the AOSP repos. If all goes well, we can expect it to complete within several hours.

Update: The source push is 100% complete.

The two new branches are called kitkat-release and kitkat-dev, and the release tag is android-4.4_r1. The code for hammerhead, aka Nexus 5, is already up, with the respective kernel repo still waiting its turn.

Hopping onto the platform/build repo for a moment, we can see that the corresponding build for the KitKat release is KRT16M. Presumably, this is the build we'll see on the Nexus 5 and possibly on other Nexus updates (though by that time, it may change). 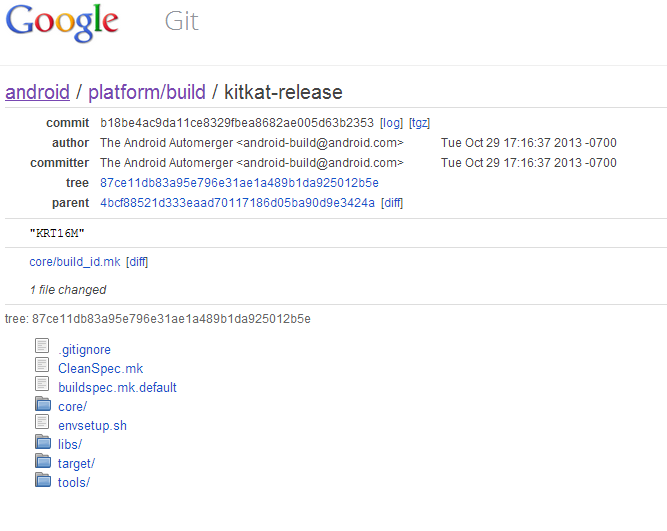 So what does getting the source code availability mean to users? It means custom ROMs, such as CyanogenMod, AOKP, OmniROM, etc. can start pulling in the changes and attempting to build Android 4.4 as soon as all the merge conflicts are resolved. Who knows, maybe someone will build pure AOSP ROMs for the popular Nexus devices by tonight...

P.S. I do miss JBQ, but Ed Heyl seems to be doing a fine job with his first major Android release.