Update: After some flip-flopping, it seems that all configurations of the Nexus 5 are no longer showing out of stock. The bad news – Google is really just indicating multiple week wait times for each version rather than saying it's out of stock. It's 3-4 weeks for the 16GB variants and the white 32GB. The black 32GB is backordered 2-3 weeks right now. Hopefully you got your order in!

If you were hoping the Nexus 5 would not suffer any of the stock shortages that plagued the Nexus 4 launch, I'm sorry to be the one to shatter your carefully constructed fantasy world. The black 16GB Nexus 5 is already out of stock in the US Play Store and it only took 33 minutes. 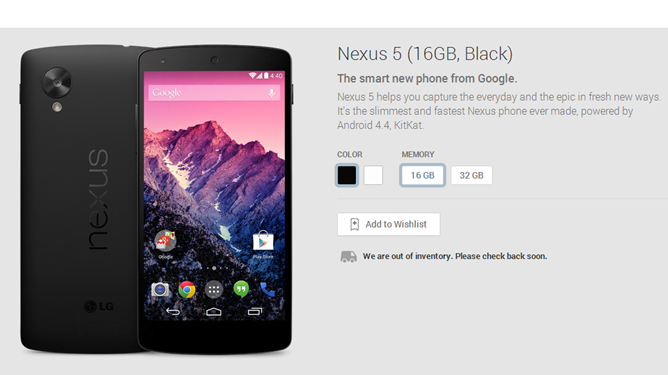 All three other configurations are available, and it's not hard to see why the black 16GB was the first to go down. The lower-cost black model was bound to have wider appeal. That raises the question, how long do you have to order one of the other models?

The Play Store is already pushing back the estimated shipping date from November 5th to the 8th for new orders. Although, the white 32GB shows 1-2 days to ship. That's probably Google assuming lower demand for that device.