One of the many photography-oriented announcements made during today's Google+ event was Snapseed's new HDR Scape filter, one which promised to produce awesome photos with a dynamic range that's deliciously high.

Unlike stock camera HDR modes, Vic Gundotra was sure to point out on stage today that Snapseed's HDR Scape filter doesn't approximate tonal mapping effects by measuring pixel brightness, but instead detects pixel edge contrast, which according to Gundotra should produce more realistic effects, close to what you might achieve with a set of bracketed exposures from a "real" camera.

Pixel edge contrast, for those wondering, is basically the difference in tone between (as you may expect) the edges of two pixels. This information, for reference, is also used by Photoshop's lasso tool to decide which pixels to snap onto (along with other information).

We've just taken a look at how the filter's performance stacks up against some stock camera apps in another post for those interested, but here are some quick shots to demonstrate how the filter works. As with other Snapseed filters, it's as easy as a tap and a swipe to apply and adjust the effect. 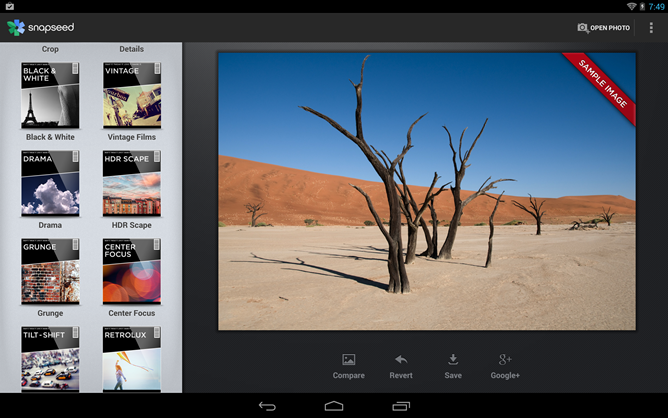 If you're already a Snapseed user, grab the update below. If you're not, but you want a quick, easy way to apply some pretty great effects and adjustments to your photos, there's never been a better time to give Snapseed a shot.

Snapseed HDR Scape Vs. On-Device HDR Modes: How Do Things Stack Up? (With Sample Photos)