Snapseed was a surprisingly big part of today's Google+ event, and largely for a single reason: a new feature called HDR Scape. Google claims Snapseed is the first mobile app to use the pixel-edge contrast method to produce HDR photos, which certainly sounds fancy. How does it stack up in reality, though? Most smartphones today ship with an HDR mode on-board, generally creating an image by taking multiple photos at different exposure levels and then combining them into a composite image. We decided to do a quick comparison using the HDR modes on two popular phones, the Galaxy S4 and HTC One, and pitting them against Snapseed's new method. Check out the results below.

Scene 1 - This scene made for a pretty easy photo, but dark spots on the tree and and bushes in the background, along with the shadow from the bench, could use a little lightening up. It's not a bad photo to start with - here's the unaltered original next to one taken with Samsung's HDR mode (left to right). 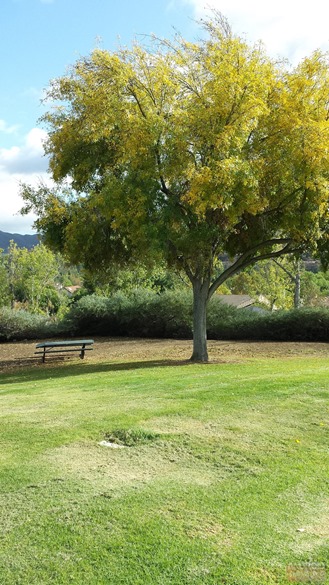 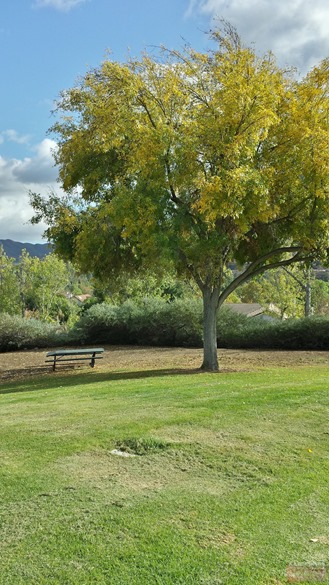 The HDR shot takes away some of the highlights on the sky and definitely makes the tree's various low and high light spots blend better. Whether the reduced contrast is more visually appealing is really a matter of taste, I guess. I have to say, though, it's not a particularly drastic difference.

Let's see what Snapseed can do with this - below you'll see the HDR Scape mode set to 25% and 50%, respectively, when used on the original, unaltered photo. 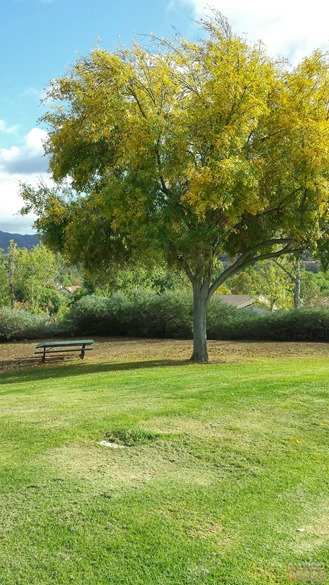 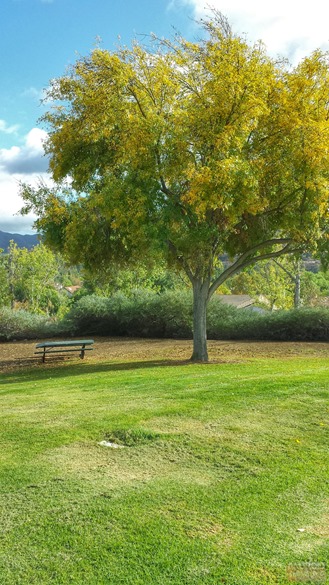 At the 25% level, HDR Scape isn't too aggressive with the image, though it obviously ups the saturation of colors substantially. The result is a less natural-looking photo, but one with very well-defined elements and contrast. Compared to Samsung's HDR, Snapseed clearly has the more noticeable effect, though at the price of photorealism. Even at 25%, it's clear to the naked eye that this photo has been edited - it just doesn't look as natural as the original, or even Samsung's HDR. Some may prefer this aesthetic, however, and I'll leave that to all of you to decide.

The 50% image basically amps up the saturation and further reduces low-light spots, and as a result looks even less realistic. If you take the slider up further, to 85%, things start to get weird. 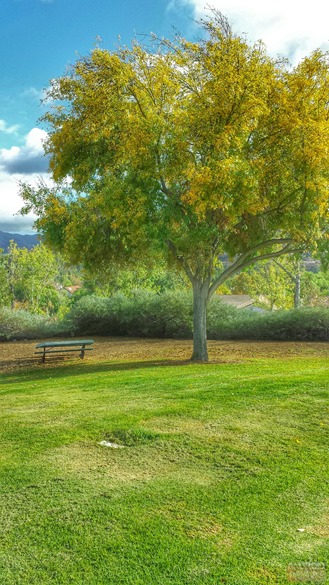 Well, it's certainly... interesting. Maybe not something every photo should be subjected to, though.

Scene 2 - This second scene had more low-lights, so you can see how that worked out with Snapseed compared to the S4's onboard HDR. The top two photos are, respectively, the unaltered original and the Samsung HDR version. The bottom three, left to right, are Snapseed HDR Scape set to 25%, 50%, and 85%. 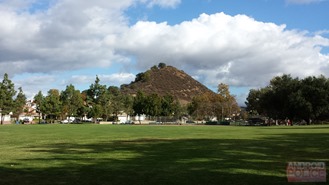 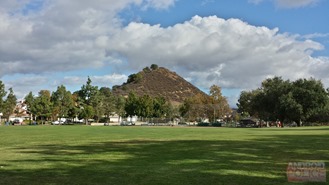 Scene 1 - this particular scene wasn't in need of heavy-handed dynamic range adjustment, but dark spots in the foreground and on the trees near the rear of the photo could certainly be lit up to give this photo a more pleasing appearance. 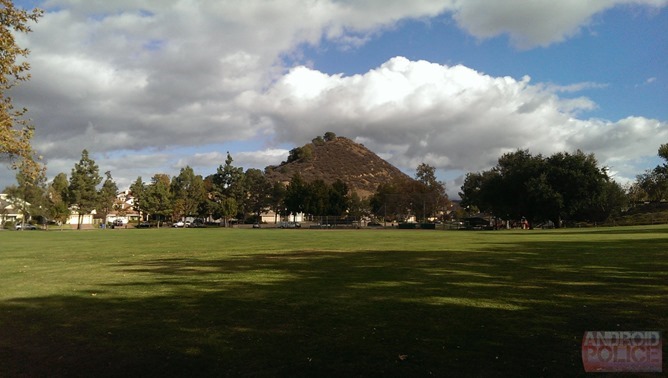 As you can see in the unadjusted photo, the shadows from the trees behind where I'm shooting add a lot of darkness to the front of this picture, and you might want to do something to balance things out. How'd HTC's HDR mode do, the one that's built into the phone? Let's see. 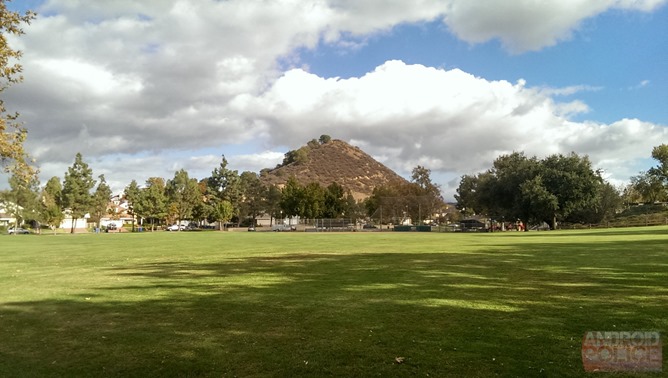 Yikes - we've got major highlights on the grass and clouds, and the photo just looks too washed out altogether. It's also developed a bit of ugly blurring if you zoom in closer. I have to say, I walked away unimpressed with HTC's HDR in pretty much every sample scene I shot this afternoon, because almost every photo ended up looking like this.

Now, let's look at how Snapseed did. 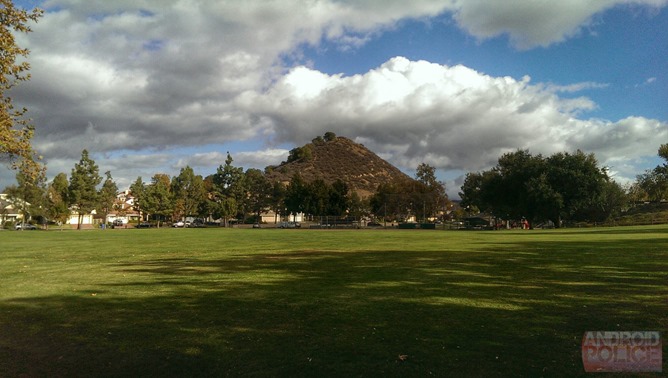 At just 25% of the effect scale, HDR Scape does an admirable job of bringing out some color in that dark grass, and even some of the trees in the back. The clouds look a bit more defined, and the whole picture just appears a little more crisp. The shade of green on the grass, though, is approaching a level of saturation I'm not sure I'd like. But overall, I'd say the photo is improved in a number of ways, even if has lost some of its realism. So, what if we turn up the HDR dial further? 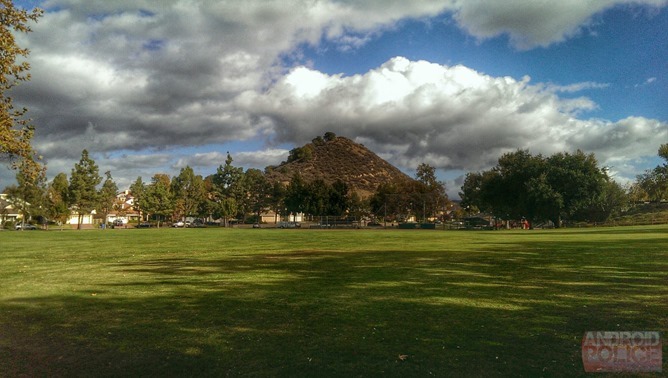 Wow, those clouds are really popping now, and the grass hasn't gone all crazy-crayola on us. The trees are a much more defined element in the composition, and the sky has tons of texture. Neat, though obviously not a very realistic photo anymore. Let's go one more. 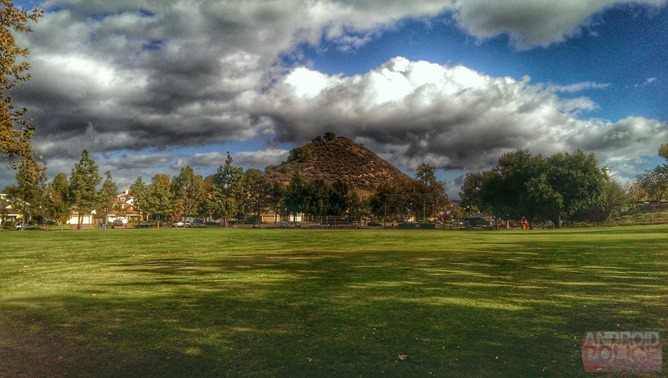 Whoah there, now we're getting a little crazy, and look at all the ugly noise in the sky! I'd like to point out that 85% is the default adjustment level when you use HDR Scape in Snapseed, so expect some hilariously over-processed photos in a Google+ feed near you soon enough.

Scene 2 - Here are the shots from the second scene I did with the One, in a more condensed format. The top two images are the unaltered photo and HTC's HDR version. The bottom three are, from left to right, the 25%, 50%, and 85% Snapseed HDR Scape photos. 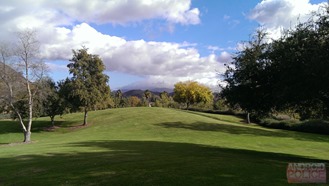 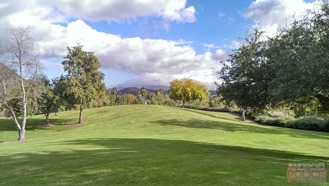 The conclusion I'd draw at this point is that while Snapseed's HDR Scape is definitely a very powerful tool, it's pretty easy to use in a way that doesn't really make photos any better, so much as it makes them weirder. With a light touch, however, it seems HDR Scape can be used as an effective HDR substitute in certain situations.

Frankly, my jaw wasn't dropped by either the on-device HDR or Snapseed in any particular scene. These are still photos from smartphone cameras, and even altered they still have many of the shortcomings smartphone cameras suffer from - lack of detail at full crop, noise, and less than perfect exposure / white balance.

Has Snapseed made on-device HDR useless, though? I really don't think so, though I'm not sure on-device HDR was ever all that useful in the first place. Its effects are rarely beneficial enough to warrant the long processing times it requires, and it can even make some photos worse (looking at you, HTC One). In that sense, HDR Scape is a more versatile tool - you don't have to worry about turning on HDR mode, and the processing doesn't happen until you decide to edit your pictures. You can also choose the level of HDR-iness you desire.

In short, it's not magically going to turn your phone's photos into works of art, but it's an easy way to fix up low lights and add some (admittedly, less than realistic) texture and contrast to a boring image. You can try out HDR Scape by downloading the Snapseed app, linked below for your convenience.