Why would you want to watch TV shows on a TV? That’s so 2005. The options for live streaming your favorite TV shows on various devices abound. But until now, the options for live streaming on Android were hard to come by. None of the popular apps (Hulu, Netflix, Crackle, etc.) have this feature. This is why Aereo is different. It has been available for a while on iOS, although curiously not through an app, but via the browser. Now it’s available for Android in the Google Play store. This is great news for cord cutters. You no longer need to walk around with your fingers in your ears to avoid those Glee spoilers, while awaiting its availability on Hulu. Well, it’s great for those in seven cities, anyway. Oh, and those with Android 4.2 or higher. However, for that small subset of people, you’ll love Aereo, even with the slight beta glitches.

As Jeremiah posted few days ago, Aereo is a live TV streaming service that uses a tiny TV antenna located in a data center. It stores your recordings on a cloud based DVR. Aereo is available on Android 4.2 or higher in these cities: New York, Boston, Atlanta, Miami, Salt Lake City, Houston, and Dallas. (More cities coming soon.) There are two account options:

Either plan allows for up to 5 registered devices at a time (PC/mobile). Your recorded shows can be seen on any of your 5 devices. Roku is also supported for up to 5 additional devices.

Recording and Watching Your Favorite Shows

Aereo comes with a handy guide, just like those big cable/satellite providers. When you open the app, it takes you to a “Featured Programs” page. Unless what you’re looking to watch happens to be on that page, you’ll most likely want to tap the menu to open the slide out navigation. The menu gives you the guide, your recordings, and the antenna. The guide is easy to use, maybe easier than some complicated cable company guides. 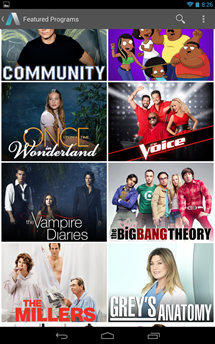 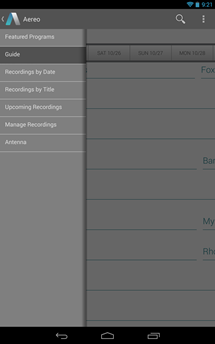 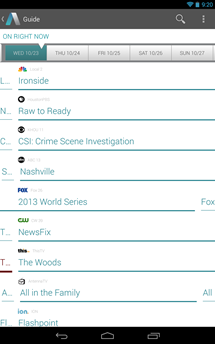 You can tap on a show a get a description, what season/episode it is and if it's new, as well as the button to hit "record." You can scroll ahead about two weeks on the guide, which is handy. 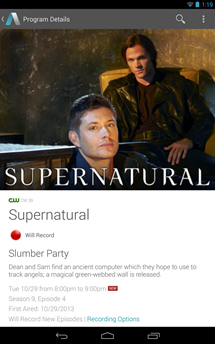 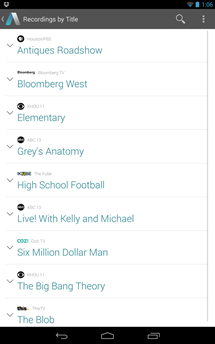 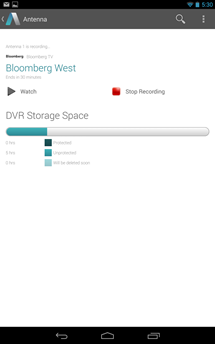 Your channel options include the major ones: ABC, CBS, NBC, FOX, CW, PBS, as well as various religious, children's, and Spanish language channels, plus a few channels that I don’t recognize from my Directv guide, but could be hidden in there somewhere amongst the hundreds of channels. Those last few oddball channels show old (I mean really old) shows like All in the Family and Gidget.

In the slide out menu, in addition to the guide, you can view your recordings by date or by title. You can also "Manage Recordings," which simply means you can rank your series in order of importance, in case there is a conflict. The final item in the menu is the antenna, where you can view what's currently being recorded, as well as your space available. There is also a search menu present throughout the app to easily locate shows. If you pause a show, you get a handy widget in your notification shade to resume playback. 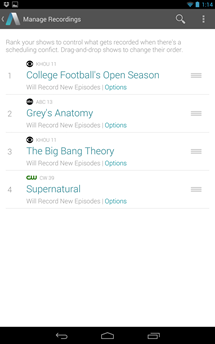 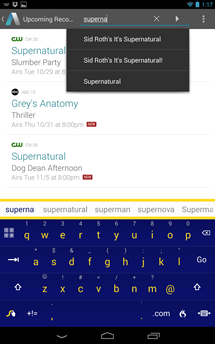 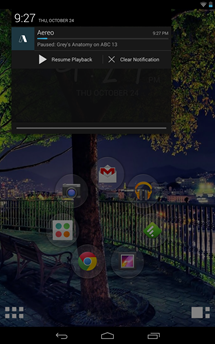 Playback went surprisingly smooth. The picture is crisp and clear – if you're watching something newer. I suppose I can't complain about a 40 year old show like the Six Million Dollar Man being less than fresh. In fact, those really old ones weren’t even filmed in the same aspect ratio as today's shows, so there are black bars framing the picture. But I'm getting off topic. You're going to want Aereo for the shows currently airing. Most of the shows from this decade look great. The newest shows look spectacular, particularly on my 2013 Nexus 7. Playback also looks beautiful on my Nexus 4. Ditto on my laptop. Screen quality and internet speed will cause experiences to vary, I'm sure. Within the settings menu, you'll find Aereo's "Video Quality" feature, which checks your internet speed and will adjust the quality of playback based on the results. But still, I imagine there is an internet speed that would make this app stutter. Keep that in mind for your situation. However, notice I said "looks beautiful." Actually playing the show was mostly great, but there were issues to be elaborated on soon. Rounding out the settings menu are options to link with Roku and customize your guide. 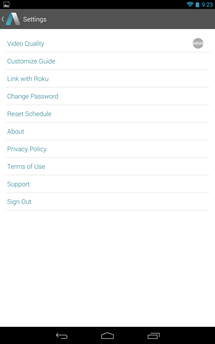 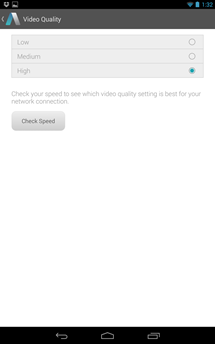 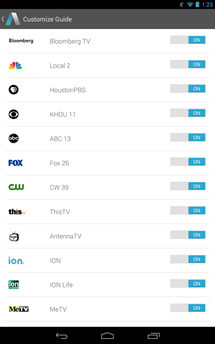 As with the cable/satellite providers, there are advantages to watching recordings versus watching live TV. With live TV, you won't be able to rewind or fast forward, but you can pause. Aereo says that you can rewind a live show, but you can't. I tried. It simply doesn't work. You can pause only. Whereas while watching a recording, you can fast-forward past commercials, pause, and rewind. You can scroll along the timeline by tapping it, which is way cooler than a traditional DVR, with exceptions. With older shows, it has a lickety-split reaction time. You put your finger wherever you want to go in the timeline and bam, it goes. But with any show that is newer, it can take much longer. If you want to rewind, Aereo takes some time to catch up. Maybe this is because there is more data wrapped up in a high definition TV show? Maybe it's a function of the internet at the time I was using Aereo, because sometimes it was snappier. But for the most part with older shows, the playback rewind/forward function is great and with newer shows, you will need to have your patience in check.

There is one feature that I use a lot with my traditional DVR that Aereo doesn't allow. I like to begin watching something that has already begun recording, but has not finished. Starting 15 minutes in allows me to forward through the commercials. What can I say – my time is too limited for commercials. I don’t have to wait until the show is completely finished recording to begin watching it. (I’m busy and impatient.) However, Aereo is not that sophisticated. I tried it and it just will not allow me to start a show from the beginning that is only halfway through being recorded. It will only start from the point it is at in the live broadcast. Perhaps with the upgraded plan, this would work? Perhaps it’s not that advanced. Perhaps I’m the only person who even wants this feature? 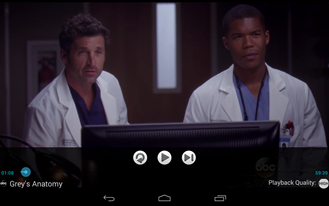 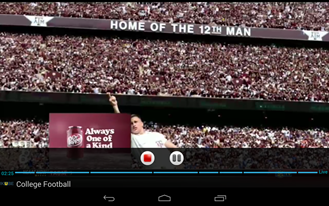 Yes, you can watch Aereo on the big screen with Roku. I was able to pair with my Roku account and add the Aereo channel. My recordings were available there, and I could also watch live TV, just as on any of my devices. The picture was crisp, clear, and streamed just fine. The device limit of five doesn’t include Roku in that total. In other words, when I set it up, Aereo stated that this was one of five Roku devices allowed on my account. So, I suppose if you own four more TVs in your house, you can go to town hooking up Aereo to all of them.

It Is Still In Beta

In addition to the quirk mentioned earlier regarding playback, I hit another snag. Late one night I tried to play Grey’s Anatomy on the N7 and after I hit play, I got a green screen of death, but I could still hear audio. The N7 froze and I couldn’t get anything to work. Out of curiOSity, I picked up my N4, tried to play the same show and it worked beautifully. So, I tried two more times (I can be stubborn that way) and the same thing kept happening. At one point, I got an error that Aero had stopped working and it shut down, but I could still hear the audio. That's right, the app was literally shut down, but the audio kept playing. I had to restart my N7 to get it to shut up. After I restarted, I signed in to Aereo again and it played fine. I'm chalking this up to Aereo’s beta state. I really didn’t notice any other glitches. I was able to replicate the green screen of death the next day, so by my calculations it happened about 10% of the time on my N7. It never happened on the N4. For a beta, I'm okay with that.

As For Those Limitations

In addition to the access limitations of your home city and your version of Android, legal issues bring possible limitations to Aereo. If broadcasters have their way, Aereo may lose channels. Broadcasters have been suing Aereo for several reasons. One claim was that Aereo infringed their copyrighted material because Aereo's streams constituted public performances. Federal appeals court ruled that Aereo’s streams to subscribers were not public performances. This makes sense to me, since most of us don’t invite the public into our homes to watch TV. The other, bigger issue is money. Aereo isn’t paying the fees to broadcasters that cable companies pay, so yeah, I suppose that’s hitting them in the piggy bank. For now, the courts have allowed Aereo to continue, but some networks have threatened to remove their broadcasts from the air and make them cable only. Since Aereo works using an antenna, this would sufficiently stifle the access.

Another limitation for many people is sports. To really "cut the cord," my husband would need sports. You get some sports with the major five networks, but I didn't see ESPN in Aereo's lineup. Or ESPN 2, ESPN 3, ESPN 4 or however many there are now. So, we will not be cutting any cords in my house until one of these streaming services win over the big sports broadcasters.

Is It Worth 8 Bucks a Month?

If you are in the small subset of the population who live in one of the seven cities, have Android 4.2, and wish to give the cable company the boot, this service is a no-brainer. Yes, many of the network shows are available on the other streaming services, but they are not organized in this elegant manner, nor are they available live. Even if you add this in to your repertoire of streaming services, you are still saving a huge amount of money over the cost of a cable/satellite bill. Maybe you still want to use Netflix for the original programming or Hulu for the cable-only shows, but live TV on the big five networks is where Aereo shines. And it shines brightly.