If you thought that the Moto X was too expensive at $199 for an on-contract phone, you're in a vocal majority. After a couple of months on the market, Motorola would seem to agree. The Moto Maker customization site was updated with the banner below this morning, dropping the price for the customized AT&T model down to just $99.99 for the 16GB version. The AT&T-exclusive 32GB model is also cheaper at $149.99. 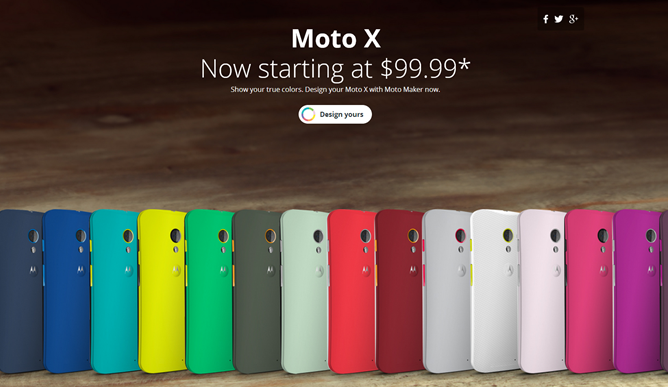 Sprint and US Cellular have also dropped their prices, and the latter is still offering a $75 credit if you open a new line and port in your phone number, bringing the final cost down to a very attractive $24.99. Verizon's website still lists the Moto X at $199.99, so it's not yet clear if Verizon intends to lower its price or if they're going to keep the X high. Considering that they've got exclusive and very similar DROID phones to sell, it could go either way. Still, if you're hunting for deals, Amazon and Best Buy have the Verizon Moto X for $99.99 already, and Amazon is selling the Sprint model for just $79.99. Strangely, ready-to-ship Moto X on AT&T's website is still $199.99.

Mobile Nostradamus EVleaks correctly predicted this price drop way back in August. Based on the Moto Maker site and the carrier portals, the off-contract price on the Moto X is remaining regrettably high. There's also no sign of the Moto Maker customization option losing its AT&T exclusivity any time soon. Even so, I'd expect to see even deeper discounts as the holiday season approaches, and of course we'll be sure to alert you to any deals.

Chainfire's DSLR Controller Gets Updated To Version 0.99.3 With Revamped Auto Focus Support And ...