The original Plants vs. Zombies was a fabulous mobile game even though it didn't debut on a mobile device. It launched on PC and Mac way back in 2009, a full year before it landed on iOS. Still, Plants vs. Zombies turned out to be ideal for an immersive touchscreen experience. The sequel has many of the same gameplay elements that made the first one so compelling, but there is more going on here. Plants vs. Zombies 2 arrives after developer PopCap has been acquired by Electronic Arts, which has not exactly won the internet's everlasting love. So, can the fun of plant on zombie violence make up for a new focus on in-app purchases?

Have you played the original Plants vs. Zombies? If you just shouted "yes" at the top of your lungs, then you pretty much know how to play Plants vs. Zombies 2. The undead will stagger/fly/ride in from the right, and you have to keep them from reaching the far left of the screen. To do this, you have various seeds at your disposal that will instantly grow into brutal fighting plants. The twist this time is that you're traveling through time with Crazy Dave and his sentient time-traveling car. Why didn't Dave mention his time-traveling car in the last game? Probably because he's CRAAAAAZY.

All the classic plants from the first game like the pea shooter, sunflower, the wall-nut, and more are on deck. They are joined by newcomers like the explosive coconut cannon, fire-breathing snapdragon, and power-up-dropping power lily. Plants vs. Zombies 2 has the same sunlight system as the original – you scoop up the floating dollops of sunlight as they spring from your sunflowers and rain down from the sky. Each plant costs a certain amount of sunlight to place, so the first few minutes of each stage is a dangerous time as you ration your sunlight to build a passable defense.

A new addition to Plants vs. Zombies 2 is the plant food system. The occasional zombie will drop a unit of plant food, which you can collect and save for when you're in a tight spot. Dropping the plant food on a plant triggers a devastating special attack. Example: the pea shooter goes into turbo mode and fires off a torrent of rapid fire peas, the cabbage-pult tosses a projectile at every zombie on the map, and the wall-nut gets a spiffy new suit of armor. Plant food can really get you out of a jam and it's a good addition to the gameplay. 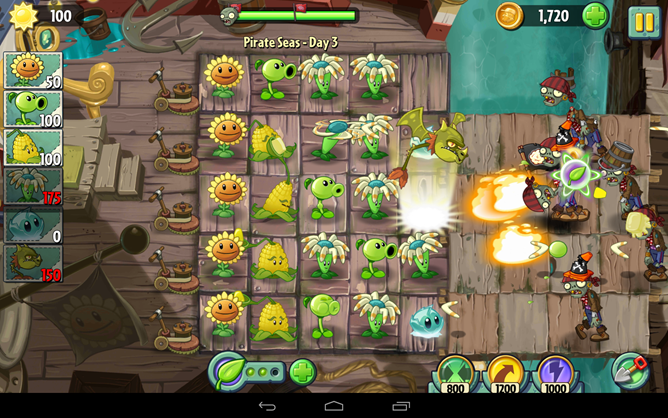 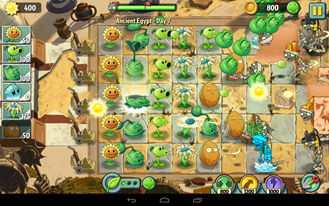 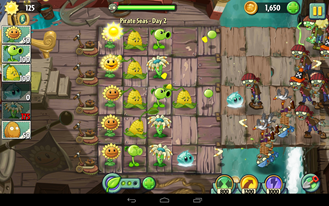 The other new mechanic feels somewhat disconnected from the rest of this title. For 800-1200 coins, you can activate one of three special powers and use gestures to dispatch a large number of the undead without the aid of your plants. The three options are pinching the heads off zombies, picking up and throwing them off screen, and electrocuting them with a swipe. These might help you get out of a scrape, but I prefer using the plants – the powers feel a little like cheating to me.

The first game was linear – one stage to the next until the game was over. Plants vs. Zombies 2 has a map that you can traverse, unlocking new sets of levels by collecting keys and completing challenges in levels you've already beaten. 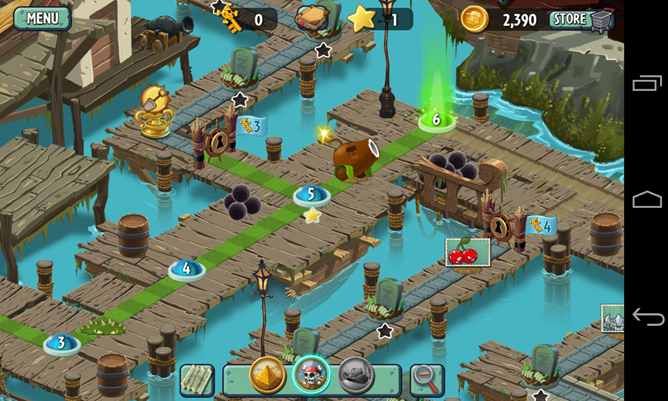 Completing challenges gets you stars, which can be used to unlock more game worlds. You begin in ancient Egypt, then progress on to the pirate seas, then to the wild west. You can also have multiple profiles under your Google account so more than one person can play the game at the same time without messing up anyone's progress.

Plants vs. Zombies 2 does a better overall job of keeping the gameplay varied than its predecessor did, but there's a reason there are new gameplay elements – many of them are tied to with in-app purchases.

You pay nothing to start playing Plants vs. Zombies 2, which is hard to argue with. Early on you'll start encountering things with price tags, but you don't have to buy any of it. Even so, it's off-putting just how much of the game has been monetized. For example, rather than play through and get all the stars to unlock the next world, you can pay a few bucks to unlock it. Similarly, you don't have to hunt down all those keys to unlock more paths on the map – you can buy access. That's the way most of the IAPs are in this title – they're shortcuts that get you around actually playing the game. In many ways, Plants vs. Zombies 2 is a better experience if you don't pay. 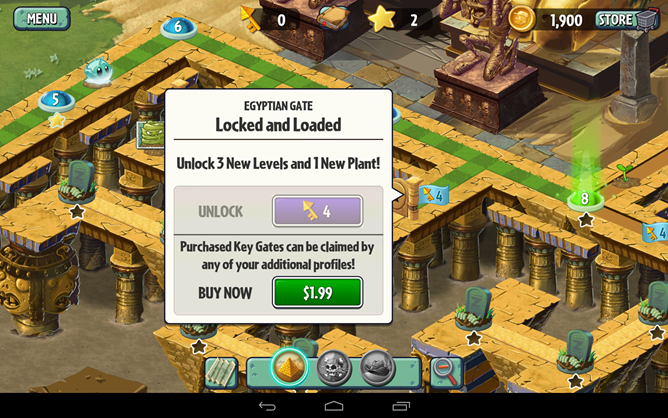 The plant situation seems more troubling at first than it actually is. There are several plants that you may remember from the first game that are offered for sale in the store (like the snow pea and torchwood). You can spend some money to unlock them, but they're a few dollars for each plant. It would be nice to have them at a more reasonable rate, but there are still lots of plants that show up in the game normally. You can also get many plants by collecting keys and unlocking new areas of the map.

I feel like the cost of items in the store is just a little high, though. Paying $4 for a single plant seems crazy to me, as does a $10 bundle with a plant, perk, and some coins. I'm not opposed to in-app purchases, but there are a lot of ways to overspend in Plants vs. Zombies 2. 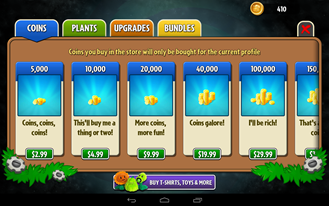 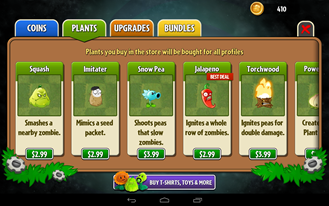 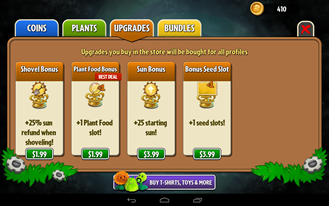 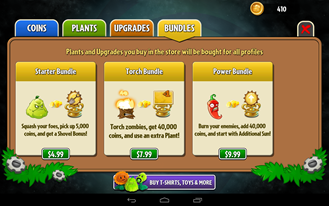 The cool new game mechanics like powers and plant food are also subtly pushing you toward dropping some real money. Each time you use a power, it costs you some of your coins. Players can also stock up on plant food in exchange for coins. Out of coins? No problem – just buy some more. The "Best Deal" tier for coins is helpfully listed as $99.99 for 450,000 coins. Yeah, what a "deal."

Again, you don't have to buy any of this, but it would be very easy to spend a lot of money on PvZ2. One good thing about buying content in Plants vs. Zombies 2 is that anything you do buy will be available to all your in-game profiles.

Plants vs. Zombies 2 is not about rendering high-resolution, realistic textures and creating dynamic lighting effects – it's about cute little cartoon-y plants and zombies. This game is still recognizable as the a Plants vs. Zombies title, but the graphics are clearer that the original. The lines are completely smooth and free of aliasing, and the animations are lag-free even with a ton of zombies on the screen. Strangely, I am coming across some lag on the map while panning around. I have no explanation for this, but it doesn't really affect the gameplay. 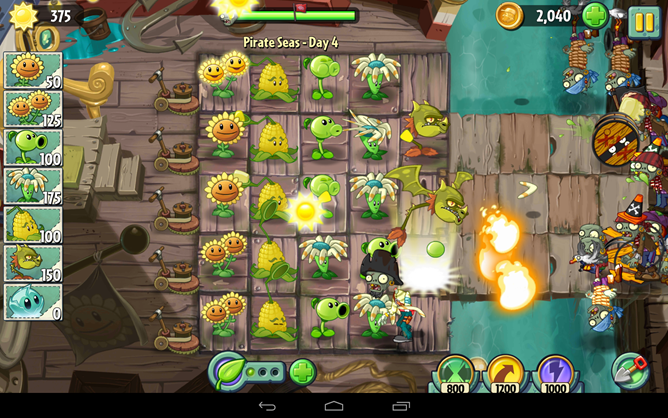 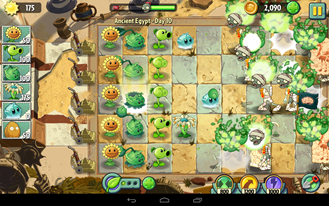 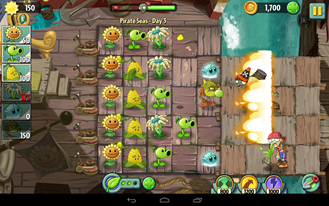 The decision to build three completely different worlds for Plants vs. Zombies 2 makes the game much more varied in appearance than the original. The different locations also allow the mix of zombies to stay fresh and a little quirky. For example, the ancient Egypt world has zombies carrying stone slabs covered in hieroglyphics as shields, and the pirate zone has zombies that launch themselves at you with cannons. It's just a very endearing game.

Yes, Plants vs. Zombies 2 has implemented an annoying system of in-app purchases. There were times that I felt I was forced to grind through challenges as an alternative to spending an unreasonable sum of money. However, grinding might not be the right word – this game is genuinely fun. Even if I have to go back and complete a challenge to get more stars or keys, that doesn't really bother me. Additionally, Plants vs. Zombies 2 is dropping keys at about the right rate that I'm not getting annoyed. 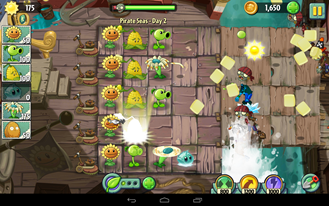 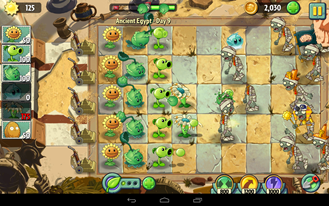 Almost everything that is on sale through the store can be obtained by simply playing the game (except for some plants, as near as I can tell). Your progress will be slower, but it's not like there's a crappy section of this game that you're going to have to force yourself to play through – it's all pretty good.

The developers have also (to my great joy) included Google Play Games support with leaderboards, achievements, and cloud synced game progress. Note that it may appear at first that your game isn't syncing, but just input a new profile name on each device, then log into Google Play Games. Then you will be able to switch profiles to the synced one with all your progress. 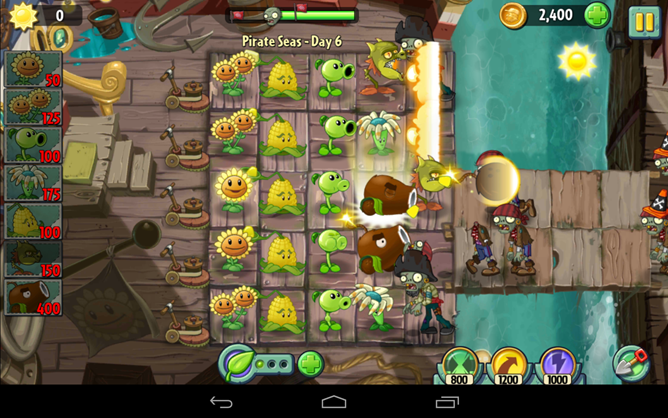 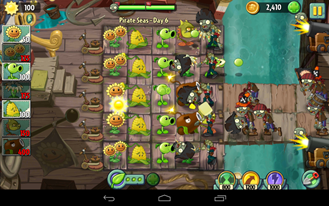 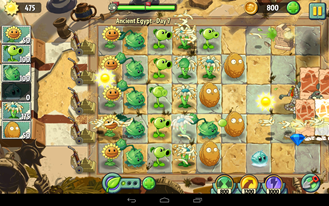 We can complain about in-app purchases forever, but they aren't going anywhere. After playing this game over the past few days, I am of the opinion that there's enough here free of charge to dive in – there is a whole game to play without touching the IAPs. Plants vs. Zombies 2 is a seriously fun game that you can spend money on if you want, and that's it.

Report: YouTube Is Set To Launch Its Own Subscription Music Service Later This Year