Google is quietly rolling out an update to YouTube for Android with version 5.2.27 on top of the current version 5.1.10. If you're eager to install it right now, we have some download links towards the end of the post.

While 5.2.27 does have a whole bunch of changes under-the-hood which are mostly related to the upcoming offline download support, there are, surprisingly, no UI tweaks and new features that you can dive into right now.

Usually, when we see an app go from X.1 to X.2, there is at least something new to play with, but after looking at every screen I could think of, I saw nothing. Outside of the existing and pretty much broken preloading of videos in subscriptions and the Watch later list, offline support that is supposed to let us cache videos for up to 48 hours without a working Internet connection is currently still MIA. Perhaps Google will be able to flip the switch server-side and turn it on in November, or maybe there will be a follow-up update later. 5.2.27 feels like a ticking time bomb, which is strangely exciting.

However, I do have some good great awesome news. We're still combing through all the source files, but I can promise you right now that the APK teardown is coming, and a lot of you will be ecstatic after seeing it. In the meantime, grab the APK and start hunting for more changes. 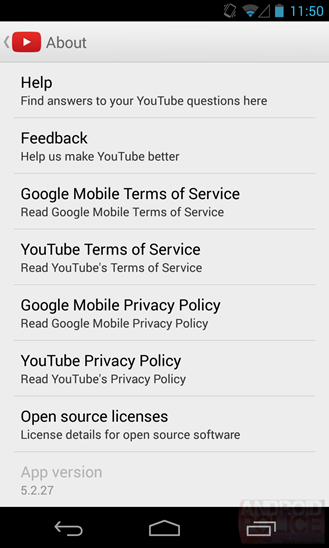 Is Someone Stuffing BBM's Ratings On The Play Store? App Accumulates Nearly 65k 5-Stars In 24 ...