For many moons, Android users were crying out for a unified messaging solution, and Blackberry Messenger seemed like a good solution. As Android was starting to take off in late 2009, BlackBerry (at the time RIM) was already feeling pressure from the iPhone, so why not branch out and get users hooked on BBM? Perhaps management was in denial as the co-CEOs actively dismissed the clear trends in mobile around that time. It's taken all these years for the company to let its precious messaging service out of its Canadian cage. BBM is on Android at long last, but is it too late to matter?

Once you get the Golden Ticket email saying your place in the BBM ecosystem is ready, you can log into the app with your email and create an account. The signup process for BBM is a little more extensive than other services. You need to enter a birthdate, country, agree to several terms and conditions, and choose a password recovery question. After all that, you are graced with your own BBM PIN. 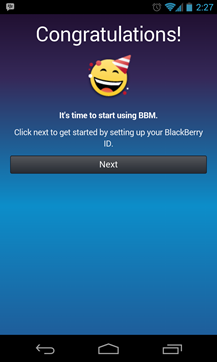 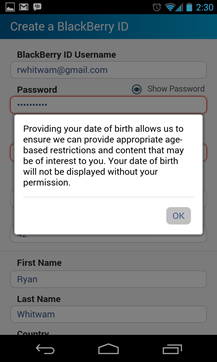 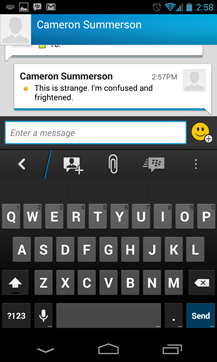 A BBM PIN is like a username or an email address on other services, but it's only for BBM. Veteran users of BBM will be familiar with how this works, but it might be confusing for others. It's a strange scenario because you don't just add people to your contact list – you send an invite and the other party accepts it. Only then are they on your contact list. It's counterintuitive in today's world, but I can see how this is a more secure way to do things. I'm not sure that's terribly important, though.

BBM has a myriad of ways to invite people to chat. You can send an email, an SMS, enter the other person's PIN, or tap phones with NFC. There is also a neat QR code system where one of you can scan the other's code to link up. It's neat, but still somewhat confusing. Contacts are supposed to show up as soon as they've accepted the invite, but I've been having some problems with that. Sometimes they appear correctly, but other times I've had to restart the app to get the contact list to update. 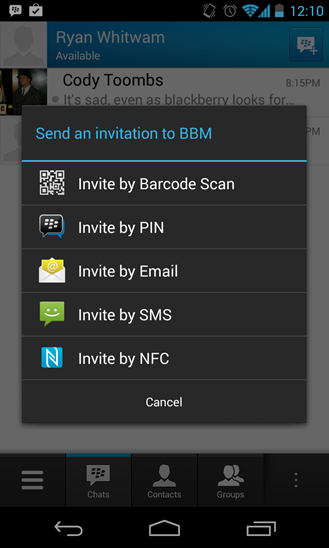 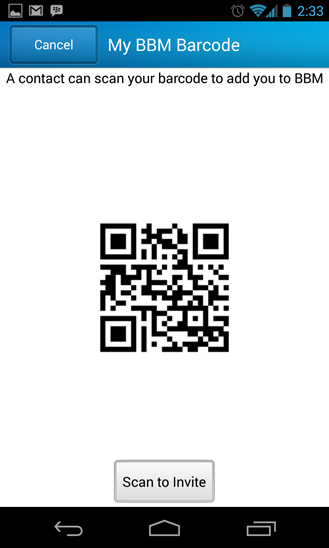 Once you have someone to message, you'll probably notice that there is a persistent notification icon in the status bar. That stays there all the time and it's kind of annoying. There is a toggle in the settings to disable it with the caveat that Android might close the app in the background if you do. If your device has 2GB of RAM and you're not playing a heavy game, it should be fine. Still, this shouldn't be something you need to worry about.

The app is laid out unlike most Android apps, which is maybe why it's confusing to get around in. There are tabs at the bottom for different areas of the app, but there is also a navigation panel that can be pulled up on the left. Oddly, several of the options in the nav panel are the same as the tabs. I'm not sure why I need two ways to open my current chats in the same general area, but there it is. On the opposite side of what amounts of a slightly blocky action bar, is a menu button. This will open a list of actions based on the part of the app you're in. Again, this duplicates some functions and feels awkward. 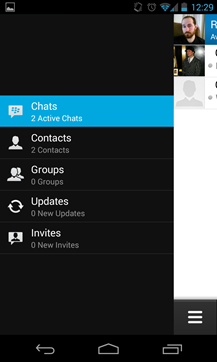 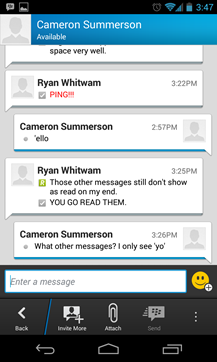 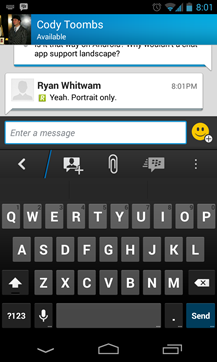 Note that some of the messages are arriving out of order

That bulky action bar also appears above the keyboard when you're in a message thread. It includes the send button, group chat, attachments, and the back button. Yet again, there is a menu button that opens a slide out menu with several of these functions needlessly duplicated. I really do not understand this waste of pixels. The action bar itself also takes up a ton of vertical space – it can be hidden while the keyboard is up with a setting toggle, but that's not terribly convenient.

One thing that's irking me is that I cannot find a way to exit the app. It is possible I'm missing it, but that simply means it's buried in a ridiculous spot. If you're logged in, that's it. People can message you in spite of your away message and there's no easy way to mute notifications. You have to go into the settings and shut them off entirely, then remember to reactivate them later. You can force close the app, but that's a crazy workaround for a feature that should be included. The app also lacks landscape mode and is only compatible with phones.

Messaging reliability has been a hit or miss so far. A few messages are arriving late for me, and some of mine are simply disappearing into the aether, never to be heard from again. Ideally, you're supposed to see an icon when each message is delivered, and another when it's read. It's cool when it works, which it has been increasingly the longer I use it. I also really appreciate the use of expandable notifications on Android. 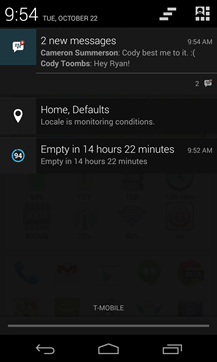 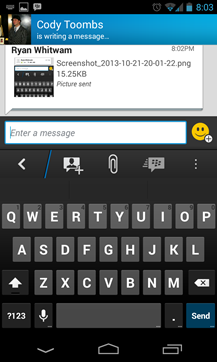 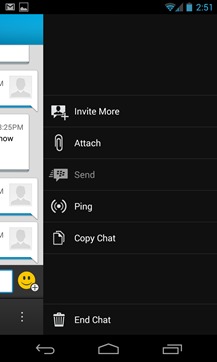 I know the service is just rolling out to Android and iOS, so I'm tempted to say it's just a bumpy launch. However, BlackBerry had months to get this figured out. Technically, BlackBerry had years to get ready for this, if only it hadn't been in denial about where things were headed.

Blackberry played up the previous Android leak when it finally announced the resumed rollout – the company said it was incredible so many people wanted to use BBM. It's the same way with the first day downloads, which were in the millions. Frankly, I think this is either an intentional misreading of the situation or another example of BlackBerry being out of touch. People aren't clamoring for BBM anymore – there is nothing new for most users here. All those millions of downloads were just about curiosity – maybe even morbid curiosity. Witnessing the last gasp of a once dominant empire. 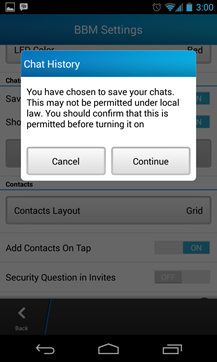 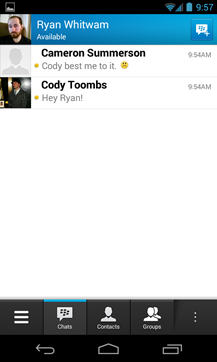 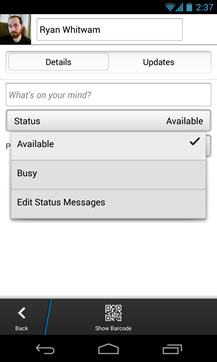 BBM's features like read receipts, group messaging, and file sharing have since been duplicated reasonably well by more modern services. Additionally, there is no longer a massive contingent of Blackberry users in most regions to justify using this app – most of us simply don't know people who use BBM anymore. I am aware there are places where BlackBerry is still widely used, but I don't live there and can't really speak to that.

Perhaps the only feature BBM can still hang its hat on is security. BlackBerry is serious about that, but how many folks are using that as their first and only criteria when choosing a messaging service? I don't know, but I probably don't want to communicate with that kind of person for a variety of reasons.

After all the years of waiting, BBM is just another messaging app. Once the kinks are worked out I have no doubt it will be reliable, but it doesn't do anything special. Figure in the awkward app design and I can't see myself using this going forward with products like Hangouts and WhatsApp out there.