Recently, we tore down an unreleased version of Google's Play Store 4.4 update and discovered that Newsstand, an upcoming Play service we first learned about back in March, had made some progress.

When we first saw Newsstand, it was in the midst of Javascript and CSS in the web Play Store. At the time, it looked like Newsstand would be an addition to the existing apps, books, tv/movies, music, and magazines categories, adopting its own yellow brand color (#FFD700 to be exact).

Of course today we got a new Play Store APK (which you can download here) that had a bit more to say about Google's impending news service. Perhaps the most notable bit of Newsstand news is the menagerie of iconography found in the APK: 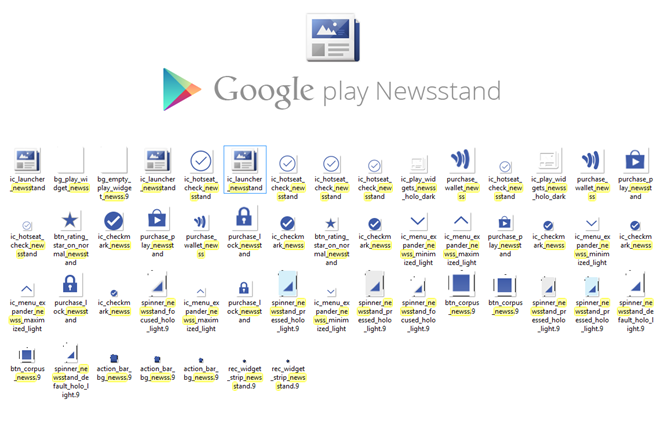 Besides the cornucopia of references to newss or newsstand here, it's pretty clear that Newsstand's color has gone from yellow to the familiar purple which currently belongs to Play Magazines. In fact, only launcher icons and a couple of action bar icons and checkmarks remain named Magazines.

This leads us to believe that Newsstand will absorb Magazines like a digital content amoeba, rolling in existing services, and adding in news publications mentioned in the strings we uncovered last time.

That's it for this teardown - besides user-facing changes like hamburger navigation and new, round overflow icons for card items (oh, and the "AP Teardown Notice"), Newsstand is the juiciest thing to be found in the new Play Store. From the look of it, Google will be ready to launch Newsstand any time now.

[Bonus Round] Oh My Heroes, The Rockets, And Alien Apocalypse

Remember Those Awesome Android Propaganda Posters From Andrew Bell? Cruzerlite Turned Them Into ...