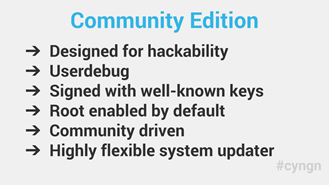 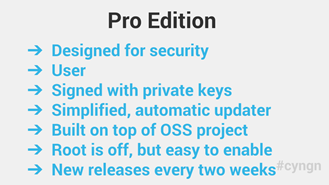 The most important information for current users is that the CyanogenMod releases will soon be split up into two distinct streams: the community edition and the pro edition. The community ROM is essentially CyanogenMod as it exists now. It comes pre-rooted, it's got features from the userdebug build, and the system is signed with well-known keys. It will also include a new built-in system updater with flexible options for backups, nightly builds, and flashing older versions. The "pro edition" (which doesn't indicate a cost of any kind; it's still free) will be issued with more security features, signed with private keys, and updated automatically to stable builds. The Pro version is what will probably be running on certain versions of the Oppo N1. It will not come pre-rooted, but it will be easy enough for a power user to enable root. New builds of the pro edition will be distributed every two weeks.

Mr. Kondik also touched on one of the main goals in the early months of Cyanogen's incorporated operations: making it easy to download and install the custom ROM. He said that while a wall of text is fine for advanced users, his mom needed a guided experience that was as easy as possible. The company will be trying to streamline that process with the installer program even as it expands the ROM family, and they're investigating ways to transfer user data from stock devices over to CyanogenMod builds. 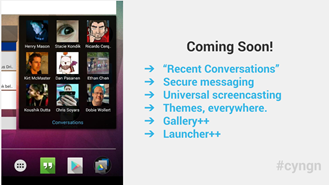 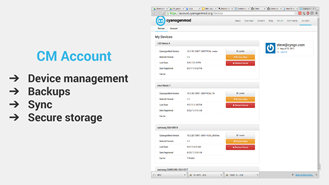 But of course, regular users need a reason to flash CyanogenMod. Non-technical people usually aren't as concerned with the purity of their AOSP experience, they just want their phone or tablet to do cool stuff. On that note, Cyanogen will continue to develop their own variants of some of Android's core features, including an enhanced launcher and gallery and more tightly-integrated cross-service communication hubs. The CyanogenMod Account service will also be expanded with backups, synced settings (and possibly app data), and secure storage. New theme options, a secure messaging service, and more widely-applicable screencasting and screen sharing were also mentioned. The company is planning to reveal more about these in the upcoming months.

You can check out a more complete rundown of Cyanogen Inc's activities at the Big Android BBQ and Steve Kondik's presentation slides at the links below. [Hands-On] From The Makers Of Any.do, Cal Is An Instantly Enchanting Calendar App Now In Beta ...