As long as bicycles have existed, those who wish to steal said bicycles have found new and inventive ways to get around whatever locking mechanisms are put in place to keep them safe. As a result, lock manufacturers have to come up with new ways to ensure their products do what they're supposed to: keep the locked bike from being stolen. Among all the different designs, the U-style lock has widely been adopted as the best and overall strongest.

Of course, all bike locks have a common issue: the lock itself. Not only are locks pick-able, but keys can be lost (or stolen), essentially making the lock itself useless. Enter new Kickstarter project BitLock that looks to change the way bike locks work. In short, BitLock wants you to ditch keys and start unlocking your bike with something that's far less likely to ever leave your side: your phone.

In the same way that Lockitron wants to modernized home locking systems, BitLock looks to bring many new and innovative features to bicycle protection. As shown in the above video, BitLock will use your Bluetooth-connected cell phone as proximity sensor and allow you to unlock it with the press of a button. While this is what I feel is the core feature of BitLock, it has a lot more to offer – like a simple and easy way to share your bike with friends.

The BitLock app will allow users to control who has access to their bike (and when), and allows those privileges to be revoked at any given moment. It will also log the location of the bike every time it's locked/unlocked, so you always know where your wheels are. At the current time, the app is compatible with the iPhone 4 and above, as well as a handful of modern Android devices: Samsung Galaxy S3, S4, Note II, Note 3; HTC One, Droid DNA, EVO (assuming this is the EVO LTE, though the BitLock page doesn't specify); Motorola Droid RAZR/MAXX/M, Moto X; and the Nexus 4 and upcoming 5. It's probably safe to assume that support for more devices will be coming as the project progresses, but that's definitely a good start as it covers the bulk of popular devices right out of the gate.

The app doesn't just stop at lock functionality, either – it also tracks valuable data normally found within cyclometers or fitness tracking apps, including distance traveled, average speed, total moving time, elevation, estimated caloric burn, and even the amount of CO2 emissions saved from cycling instead of driving a vehicle. This essentially eliminates the need for multiple applications. One app that controls basically all of your biking needs – that's something I can get behind.

Of course, the lock's strength is also a concern for many users – what's the point in having a fancy lock if it can just be hacked off easily? According to the Kickstarter page, BitLock is both hacksaw- and bolt cutter-proof, as it's made from "reinforced, heat-treated, and cut-resistant steel." All the security isn't just found in the metal, either – the app uses bank-level encryption to ensure it's not something that can easily be "hacked" from another Bluetooth device. 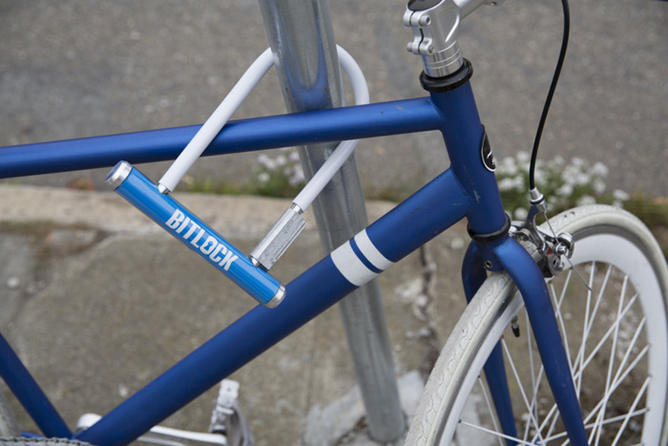 Any time something is modernized and digital tools come into play, there's another concern: battery life. According to the BitLock crew, the battery inside the lock can last an astounding five years without ever having to be replaced. That's pretty incredible.

Speaking of battery, should your phone's battery die (or worse, the device be lost or stolen), BitLock generates a 16-digit binary code (which happens when the lock is initially set up) that can be used to unlock the device via a second button. You can also borrow someone else's phone, log into your BitLock account, and unlock the unit that way. So you're not completely out of luck.

Currently BitLock has received nearly $45,000 of its $120,000 goal, but it still has 27 days to go. There are, of course, several different pledge levels, but if you want to ensure a BitLock for yourself, it'll set you back $99. The units are expected to ship in July of '14 should the project get all its funding. For more information or to donate to the project, check out the Kickstarter page.