Remember the LG Optimus Pad? It came out back in 2011, a time when seeing Android running on a tablet was relatively new. I bring it up now because that was the last time LG released a tablet in the US. Today the company has announced the immediate availability of its successor, the LG G Pad 8.3, a slightly smaller tablet that will retail for a lower price of $349.99. Best Buy has pre-orders available online in both black and white. It will appear in stores a few weeks later, on November 3rd. 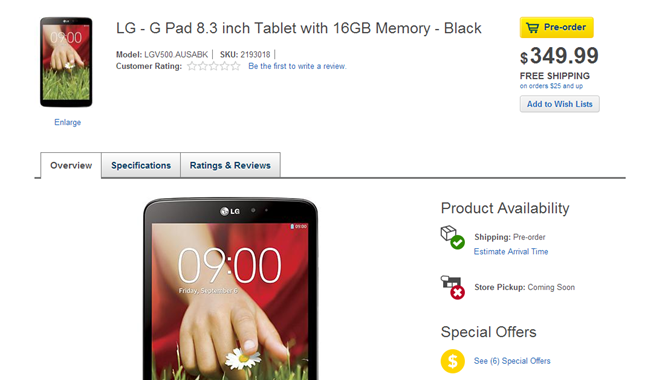 We provided a hands-on look at the G Pad 8.3 back at this year's IFA, but here's the gist: LG's latest tablet doesn't do all that much to distinguish itself from other similar sized tablets, but it's currently the most powerful option in its class. It has a 1.7GHz quad-core Snapdragon 600 processor, 2GB of RAM, 16GB of internal storage, and a micro SD slot for additional memory. A 5MP camera sits on the back, a 4,600mAh battery gives it all life, and with a 8.3-inch 1920 x 1200 IPS display, it should be pretty to look at. The G Pad 8.3 ships with Android 4.2.2 out of the box.

The tablet comes with some exclusive features, such as QPair, which allows users to exchange messages and notifications between their LG Phone and tablet. There's also QSlideFunction, which lets you float two apps over the home screen, and QuickMemo, which supports capturing and commenting on images. Still, none of that is why you want this device. Many people consider 8-inches to be the ideal size for a tablet, and here's another option in that form-factor. If you're confident LG's software customizations won't be too distracting, you can pick up the tablet by following the links below.